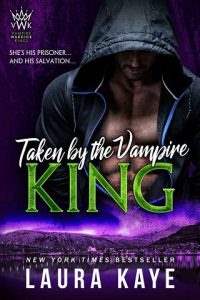 “I am dying,” Henrik Magnusson said. “We all know it.”

Standing at the head of the council table, he looked over the grim faces of his warriors, most of them suddenly fascinated by the three-hundred-year-old expanse of spruce in front of them. He didn’t blame them for the avoidance. It was hard to stare mortality in the face, especially when your kind was supposed to be immortal.

Jakob’s gaze shot up, anger and resolution burning in his blue eyes. “It is not. My lord,” he added as an afterthought. “We will bring in more Proffered.”

Over the past decades, they’d brought in many virginal human women trained to serve the blood needs of the vampire warrior class to cure him. Not only had Henrik not found a mate to sustain him, he’d never once blood-matched with any of the women. And their blood, at best, provided only a temporary alleviation of his inexplicably deteriorating condition. It had gotten to the point that he barely found blood palatable anymore.

“We will. But it will not likely work. My death is an eventuality for which we must plan.”

Jakob shoved up from his chair. “I will not rest until we find the one who can…” Save you.

The words hung in the cool air and bounced between the gray, stone walls as if the warrior, Henrik’s brother and the sole heir to the throne, had shouted them.

His brother shook his head and met the hard gaze of each of his brothers-in-arms. “We will not give up.”

Murmurs of agreement rumbled through the room.

Henrik slammed his fist upon the table and flashed his fangs. “I. Am. Dying!”

The room and every vampire in it went preternaturally still. Jakob’s expression was frozen somewhere between grief and rage.

Breathing hard, Henrik willed the tension from his shoulders. Human blood, especially from a mate, was a stabilizing force that guaranteed a vampire’s immortality and humanity. But it had been a long time since Henrik’s body had processed blood that way, so he’d steadily been losing both—and the past year had been the worst of all. When the rages came, he struggled to control them, and he was walking a very fine line right now.

Henrik stared at his brother a long moment.

The male appeared a much younger version of himself. He possessed the blond hair Henrik had before his mysterious ailment had turned it nearly white. And Jakob’s eyes remained a dark, turbulent blue, like the color of the seawater that flowed through the many fjords snaking through their native Norwegian lands, while Henrik’s had dulled to pale blue ice.

“Goddamnit.” The king stalked away from the table and crossed to the uncovered windows along the far wall.

The polar night afforded them the luxury of leaving open this portal to the outside world. For three months each year, the sun never rose, turning the north lands into the perfect home for a vampire. But as with all things, the full darkness of Mørketid ended, bringing a month of Seinvinter, when daylight slowly returned in advance of the sun once again cresting the horizon.

Tomorrow was Soldagen, the first day of sunlight’s return. The day marked the end of the last polar night Henrik would likely ever see.

He braced his hands against the ledge and stared up at the undulating lights in the night sky. Within the diffuse green of the aurora borealis was a sharp-edged curtain of rare—and ominous—red.

“Even the lights foretell my fate,” he said, forcing calm into his voice.

He turned back to his warriors, every one of whom would’ve laid down his life for Henrik if they could. Jakob remained standing, stance ready, muscles braced. His dogged determination would make him a good king. And since only seven vampire warrior kings remained around the world, Henrik would do everything he could to ensure his brother ascended to the throne with the full support of these males.

“I require a vow from each of you. Follow and honor Jakob upon my death as you have followed and honored me these past four centuries.”

For a long moment, no one reacted. And then Erik pushed up out of a chair.

The warrior held up a hand. “What my king asks of me I am more than willing to give.” He crossed the room, met Henrik’s gaze and sank to one knee.

Henrik held out the hand adorned with the ring that bore his family’s royal crest.

Erik grasped his fingers. “I pledge my allegiance to Jakob Magnusson to ascend to the throne as Warrior King of the Northern Vampires upon the end of your reign. As a warrior, as a male of honor, I give my vow.” Erik kissed the ring.

Henrik nodded as the warrior rose. One by one, the others followed suit. Lars, Kjell, Jens, Marius. Each gave Jakob an apologetic look before crossing the room and vowing to support him when the time came for his brother to die.