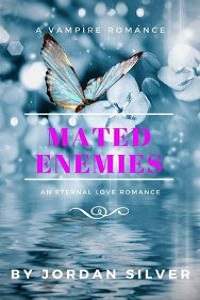 The small town of Badger’s Creek slept well beneath the dark cover of night. Outside the blue velvet night sky was blanketed with stars, the air cool and crisp, waiting to meet the morning’s steamy balm.

From above, the town was the picture of perfection; with it’s red steeple roofs and brightly painted red barns, dark shingled white dwellings in the middle of green-green fields.

Horses dotted the landscape, corralled for miles behind long stretches of ranch fencing, as geese and swans floated gently down the streams and lakes that bordered the sleepy valley. While white coated sheep grazed at will in the lower hollows, bleating out their content.

It’s a dreamer’s vision of a sleepy idyllic, New England village of days gone by. Quaint and picturesque, Badger’s Creek is one of those places, which time forgot, and it forgot sometime in the last two and a half centuries.

The streets are lined with little cottage like homes with large four hundred-year old oaks and mulberry trees along the sidewalks, some majestically gracing front lawns and the backyards of a few.

On the vast acreage owned by the Valducci family, a large plot of land that butted right up against the forest line, the wild animals were on high alert. Deer lowered their heads and pricked their ears in stillness.

Horses neighed themselves awake and owls stopped their hooting as they soared through the night to get closer, while the wolf and fox clans sniffed the air with pleasure.

Little wood animals flitted through the underbrush and even the birds that had already bedded down for the night came awake in their nests with joy. Tweeting their hellos, their eyes searching the dark for the magic that had awakened them.

Natalia had just stepped out of her home and with her head lifted to the sky, sniffed the fresh night air. Her eyes looked far ahead, deep into the night, even before she took her first step on her way to the water’s edge.

She was restless again tonight, and not wanting to disturb the peace and rest of the others, who now slumbered, chose to go for a swim to relax and calm her.

She started off on a slow run as soon as her bare feet touched the cool evening stone, the slight breeze blowing her long dark tresses around her shoulders and down her back as she moved.

The animals started up a symphony as soon as her scent hit the air and followed along with her, some on the ground, some just above the tops of the trees.

Natalia felt some of the stress leave her shoulders as her little friends kept pace alongside her until she reached the water, where they stopped to watch while she carried on.

She stripped bare and stepped into the water with joy, always at her freest at times like this. She lifted her arms and eyes to the sky, and felt herself become one with her surroundings as she embraced the powers of the elements.

By the time she dove into the calm water she was no longer thinking about her worries and fears, no longer caring about the world and its vagaries. For this brief moment in time her only focus was on being one with nature, harnessing her strength to face another day.

“How can you bear to live here? Everything is so…basic.” My mother turned up her patrician nose at my ten million dollar home with the Louis the thirteenth décor of which I’m so terribly fond.

Yes mother, the dishes are only thousand year old Wexford, nothing at all like the gold chargers and cutlery we have back at the family home that dates back to the days of the Babylonian empire.

“And the food, it has no substance to it, how do you survive?” Prime rib made just right, and new potatoes crisped in the oven with braised asparagus in Hollandaise sauce, along with accompanying dishes of roasted vegetables are indeed beneath the regal palate of my mother the princess.

“You’ve just listed all the reasons why I live here. Because I know none of the elders can stand to be here for more than two days if that. Which means there’re no eyes watching my every move, calculating my every turn. It’s called freedom.”

“Yes, but dad won’t go for it and you can’t be away from him for more than two hours so I guess I win this round.” She smiled encouragingly at me, the same smile I’ve seen all my life; but there was something, something around the eyes.

“Tell me mother, to what do I owe the pleasure of this unexpected visit?” I watched her closely, knowing that she was better at hiding her inner thoughts than even I, and I’m a master at it.

She shrugged her elegant shoulders as she paced around the room, picking up knickknacks and putting them back in place. Now I was really worried; my mother never paces and she’s never this nervous. Nervous enough that she’d let her guard down.