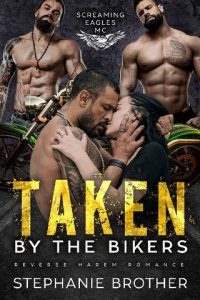 “Honestly, Emily, it's like you're not even putting in an effort. You have to understand how badly it reflects on me. I'm the mayor, for Christ's sake.”

Dad glares across the limo at me while Mom leans into him. His suit is flawless, as always, black Armani with a crimson pocket square that matches exactly her little black number. His hair is expertly styled and locked in place with enough product to build the foundation for a house. Now that his jacket is open—as relaxed as he ever gets—if I squint, I can make out the girdle underneath. It puts in an effort so he doesn't have to.

I swallow the taste of bile. It's a good thing I hardly got any food at the gala dinner he held in his own honor, because what little is there is threatening to come back up. Dad knows sitting backwards in the limo makes me ill, but I'm supposed to “Buck up and deal with it.”

“What didn't I do this time?” My mouth tastes metallic.

Besides, it doesn't really matter if I put in an effort or not. It's never enough, and it always reflects badly. I'm not pretty enough, not sociable enough, not thin enough, not made up enough. My dress is dowdy or my hair is flat. He's got more reasons than we have fingers and toes between us.

“Don't give me sass.” His arm twitches as his eyes narrow dangerously, but Mom presses into him, and he settles it on her hip. That doesn't mean I don't flinch, though. It's been a while, but if he gets angry enough…

The problem with family is that you can't choose it.

Mom puts a hand on his to hold it where it is and wiggles closer, pressing her hip against him. I look out the window so I don't have to watch. She didn't eat any more than I did, but she certainly drank more. She forgets herself sometimes when it's like that.

In theory, I should be at college, but that would mean giving up control, and that's not how Dad works. He could've paid my way into Harvard or Princeton or Cornell or whatever, and I would've taken it.

Instead, I get private tutors. A fashion coach. An etiquette coach. A dietician. A dance instructor. All the things necessary to turn me into the perfect daughter for him and his politics. Someone to marry off in a political marriage, and if you think that doesn't happen in our modern times, boy, do I have news for you.

I hate it. Every little bit of it. Even my piano teacher—because guitar isn’t a woman's instrument—manages to make music boring, and that's one heck of a stretch.

“Tomorrow, I expect you to meet with Karolynn”—said fashion coach—”so you can go over your appearance. Perhaps she has some better ideas for how to cover up your… your bulges and not make them so obvious.”

I don't swear often, but fuck him. Fuck him and his condescending attitude. My bulges. I didn't inherit Mom's skinny genes, or her tall genes, and he loves to remind me of both of those things. Then again, I'm not the one wearing a freaking girdle.

But fighting him is useless, and I gave up on it a long time ago. Like, what can I do? Run away? I tried that. Twice. It just got me security detail, supposedly to keep trouble out, but we all know it's more about keeping my trouble in. My life isn't my own, and at this rate, it never will be.

So instead of rocking the boat further, I try to sound enthused and fail miserably. “Sure, Dad. Whatever you want.”

I wish he'd just give up. To suggest I stay home next time. Then I could curl up in my plushy reading chair and lose myself while he goes to his stupid galas to preen. Comfy PJs and hot chocolate, rather than a constricting gala dress and stolen prosecco.

He snorts skeptically. “I doubt there's much she can do, but—”

The gut-shaking rumble of monstrous engines revving cuts him off. Rough like sandpaper and as furious as a lion kicked in the junk. What's coming up on us? I press my face to the window to see. The sound vibrates against my skin.

Three motorcycles, all chrome and sleek lines, their powerful engines growling. I don't know the first thing about them, but even I can tell these aren't your regular commuters or delivery bikes. I can feel them deep in my chest. We're being chased by a pack of wild animals, and basic instinct—raw and primal—has my heart beating faster. Suddenly, my uneasy stomach is forgotten.

“What the fuck?” Dad leans forward, dislodging Mom. She scoffs and gives him a disappointed glare, then eases back and closes her eyes.

The bikers catch up quickly, then slow down to match speeds with us. Predators tracking the herd. A shiver crawls its way through me. Inside our limo is a well-manicured world, orderly and controlled, safe, but boring. Out there is something else entirely, and it's wild.