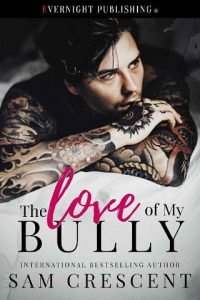 Hatred from the beginning

“Look at you. You’re so fat, you make the chair crack.”

Prudence squealed as someone pushed her off her chair, and she fell to the floor. All the other kids in the class laughed. She tried to stop the tears flowing, but it was hard to do.

Her hands hurt and so did her side.

Looking up, she saw Drake Connor smiling down at her.

“You need to learn to stay in the dirt where you belong.”

She tried to get up but he held her in place. His hand, so much larger than her own, kept her near the floor.

She whimpered, not wanting to be afraid, and yet, he had gotten beneath her skin and now she couldn’t move.

“Drake, stop it now,” Mrs. Winston, their teacher, said, shouting to be heard over the laughter.

Prudence let out a scream as he pulled her hair. “Let go!”

She dropped down, trying to stop him from pulling her hair out, but it didn’t work. He kept on pulling and tugging until she had tears in her eyes.

“No Mommy to help you now, is there? No Daddy for you. You’re nothing.”

The very blissful tears she promised herself she wouldn’t cry came. She did want her mommy, really bad. She would protect her. Drake’s parents, from what little she knew, never did come. They were never there. He was always on his own unless his friends were around him.

“Everyone here hates you. They don’t want to be your friends.”

She didn’t know how much more she could take before his weight was suddenly pulled off her.

He sneered at her and she didn’t like how much he hated her. She wasn’t used to being hated at all. Her parents had just moved to this small town, and she couldn’t even remember what it was called. The name sounded like a bike or something.

Finally able to stand, she sniffed and waited as the teacher led Drake back to his chair. She didn’t yell at him or tell him off, just made him sit back in his chair. Prudence knew deep down this was wrong.

He was mean to her and no one told him off.

“Now, class, open your reading books and let’s all take a moment to just relax.”

She stared at the kid who had bullied her.

Why didn’t the teacher tell him off or give him a warning? Resting her chin on her hands, she stared at the open book, wondering what it all meant.

“Psst. Don’t keep looking at him.”

She turned to the young boy at her table. He wore glasses and he scrunched up his nose.

“Drake’s mean. Stay out of his way or you’ll be sorry. He doesn’t like new kids, especially not poor new kids.”

Prudence stared down at her worn clothing. Her parents had needed to downsize after her father lost his job. She didn’t know what went wrong, only there was a lot of yelling at home. Her mother was often crying because of the unfairness of it all. They had gone from having nice things and a nice home to something really small. There was no yard and their neighbors played loud music and smoked all the time.

They hadn’t gone shopping in a long time. Her mother liked to sew, and many of her clothes had been turned into either skirts or shorts, or even shirts. She would stand still for her mother so she could use her needles. She’d learned the hard way not to fidget. The needles she used hurt when they were stuck into her flesh.

She shook the boy’s hand. “Are you friends with him?”

“No. My family isn’t good enough.”

“He sounds horrible,” she said, wanting to make a friend.

“He is. Stay out of his way and don’t respond to him. He always hates people who get in his way.”

Mrs. Winston shushed them and Prudence quickly looked down at her book. She didn’t want to see Drake anyway. Her back still hurt and so did the base of her neck where he pulled her hair. Back at her old preschool, she never got shoved or hurt.

She didn’t know what it was about her that he hated but she had no intention of ever going near him. Boys like that were bad news. Her mother was always telling her to stay away from mean boys. They were no good. Half the time her mother was giving advice, she rarely listened. None of it made any kind of sense to her, but she understood what she meant now. She was talking about boys like Drake.

By the time lunch came, she was so nervous because of her fight with Drake. Would he bring it out into lunch? Would any of the teachers be there to help? It was sunny and Mrs. Winston had told them all to go outside and eat. Benches were lined up in the playground for this occasion. She grabbed her lunchbox, holding it against her chest. Every time she looked over at Drake, he glared at her.