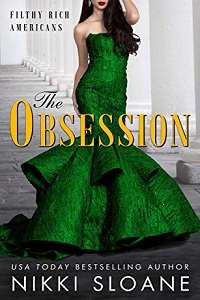 They were so cold, they threatened to burn me in an instant, a flash freeze that would turn my skin white and cause blisters to lift on the surface.

I stared up at the powerful man looming over me, who had one hand on each of the armrests of my chair, and I held in a painful breath. There wasn’t any air left in the library or the space between us. He’d used it all when he’d trapped me beneath his inescapable gaze.

Macalister’s lips were only a few inches from mine, and for one terrifying moment it seemed like he was considering kissing me. He’d do it abruptly and without permission, claiming my mouth like it belonged to him.

He’d just bought me from his son for the bargain-basement price of one hundred thousand shares. At least ten million dollars, and likely more. A roiling sea swelled and churned in the pit of my stomach. Royce had sealed the deal with a gentlemanly handshake. A business transaction agreed upon and completed. And then he’d fled the library without even a glance in my direction.

I don’t owe you anything, he’d said.

Maybe it was true.

All I could feel was the cut of his betrayal, sharp and excruciating and deep to the bone. A nasty voice inside my head hissed I should have seen it coming. Betrayal was a staple in the myths I adored, and the mortals always suffered at the hands of the gods. A heavy, expensive ring gleamed on my finger, but my engagement to Royce meant nothing. Marrying him would make me a Hale in name—not an immortal like everyone else in his family.

It just made me a target. A pawn in the game between father and son.

Rather than lower his mouth to mine, Macalister peeled his lips back into a joyless smile. “Marist, you shouldn’t find this so upsetting. As I’ve come to understand, you’re a practical girl, and I warned you Royce would sell you out the first chance he got.”

I repeated his understated word like it had been punched from my center. “Upsetting?” I wanted to sound strong, but my voice went hollow. “That’s . . . not the word I’d use for what just happened.”

He reminded me vaguely of Dylan McDermott. He was dark and intense, and looked much younger than fifty-two. His gaze scraped over my face until it settled on my lips. Only this time, it was clear he wasn’t thinking about kissing me. Now he was simply curious about the words I’d produced. He lifted an eyebrow as he evaluated me. “Oh? How would you describe it?”

I was Ariande, the maiden who’d saved the hero Theseus from the Minotaur’s labyrinth, only to be dumped on an island and left to die when I wasn’t of any further use.

I swallowed the lump that clogged my throat, blocking the word from escaping. When I didn’t say anything, victory flashed through his expression.

“We need to discuss what happens now.” He said it in the same dry way he dictated commands to his employees. “While you’re living in my house, there are expectations, and you will meet them.” He drew in a breath, preparing. “You’ll be respectful and courteous, and you will take any directions I give you without hesitation.”

My heart, which was already racing painfully in my chest, chugged at a faster tempo. I’d told him he’d never own me, but it didn’t make a difference to him. He expected me to bow down to him like everyone else.

He was ready for that. He charged forward, driving me backward until I leaned over the back of the chair and it dug uncomfortably into my shoulder blades.

“Do I need to remind you we have an agreement? If you’re not going to follow through on your end, then you cannot expect me to. My money may have cleared into your family’s account, but I didn’t get to where I am today by being a fool.” His expression was stone, his high cheekbones carved, and his lips chiseled into a tight line. “I haven’t removed the lien on your parents’ house.”

The home I’d grown up in had been in my family for four generations. It was everything to my mother, and although it would be a terrible sacrifice to make, was it worth walking away now to get out from under the Hales? What if this was our only chance at escape? In the time of a single breath, I considered cutting my losses.

But my hesitation, or my expression, must have given too much away because a sneer curled on Macalister’s lips.

“Your parents signed over authority to their financial manager. He can divert money without their consent, including the five million you just deposited. In fact, he could move every dollar under the Northcott name. He has total control . . . and he’s my employee.”