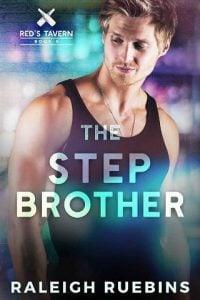 I glanced down at the blue glow of my phone, checking my text messages for what felt like the millionth time that night.

Those words were going to be the death of me. I cursed under my breath, locking the phone and sliding it back into my pocket as I walked back behind the bar. I had three minutes left on my break, but already I could see empty pint glasses that needed to be cleaned up, surfaces that needed to be wiped, and a wayward slice of lime that had ended up on the floor. If I wasn’t going to get a text back from the guy I’d gone out with last week, I might as well get back to work.

I loved bartending. Growing up in small-town Amberfield, Kansas, getting my job at Red’s Tavern had been the first time I’d really felt like I fit in somewhere. I’d had tons of friends in high school, but it still never really felt like home.

The tavern did from day one, though.

And there was plenty of eye candy right here in front of me, anyway. A hot, greying daddy had just walked into the bar. There was a younger guy by the pool tables who looked straight out of a frat party. And a classy businessman was reclining in a booth, sipping a whiskey like he owned the place. As I bent over to pick up the lime, I pushed my ass out a little, and when I stood up I saw the businessman eyeing me.

I liked the attention. I always liked having eyes on me, even if it didn’t lead anywhere.

But when I walked back behind the bar again, I found myself checking my phone, as if I hadn’t done it sixty seconds ago.

“Sam, you look like a kid who just dropped his last gummy worm into the sand,” Red said, crossing back behind the bar in his signature cowboy boots. “The guy still hasn’t texted?”

“Negative. And speaking of gummy worms, his dick did kind of look like one,” I said.

Red snorted. “So I take it the fling is over?”

“Somehow I doubt it,” Red said. “When was the last time you heard from him?”

I anxiously looked at the front doors, as if I expected him to walk through them.

“The last thing he texted me was a link to his favorite protein powder, six days ago.”

Red stood behind the beer taps, pulling a pint of the lager for a man sitting at the end of the bar. “Sounds like an asshole. You dodged a bullet.”

My heart ached. It didn’t feel like I’d dodged a bullet. Actually, it felt like everybody else was dodging me.

The guy I’d dated before this one had broken up with me after a month because he’d said his parents wouldn’t approve of my “flashy” fashion sense. And the man before that one said I wasn’t going anywhere in life, just because I’d told him I was happy with my job bartending.

People didn’t take me seriously. It had been like that my whole life. But now that I was in my late twenties, it was starting to wear me down.

“Tell you what?” he asked. Nothing seemed to phase Red. That’s why he was such a good friend, and a voice of reason in times where my heart got the best of me.

“When you see me falling in love with a guy again after only two weeks, and I’m about to get my heart pulverized, just tell me so I can quit while I’m ahead.”

Red gave me a look. “Don’t even start with that.”

“I’ve tried that before, and it didn’t work out great,” Red said. “You don’t listen to anyone when you’re in love, and you fall in love with everyone.”

I pulled in a long breath of air. “It’s not my fault. I was blessed with a big heart, a big head, and a big cock, and I really like using them all.”

Red didn’t even try to hide his smirk. “And you’re humble, too.” He grabbed the cleaning rag from under the bar and wiped off the area in front of us.

“I’m proud of what I’ve got, sure,” I said, grinning. “But that doesn’t make it any easier to find a good man.”

“You know I’ll always tell you what’s on my mind,” Red said. “But my advice is the same as it’s always been. Get off the damn hookup apps if you want a good man.”

“Hey,” I protested. “There are good men on apps, too. You just have to sift through lots of bad ones.”

“Maybe you need a break.”

“You know what? You’re right,” I said. “I’m vowing myself to celibacy for the rest of my life. Hot guys can’t be trusted. It’s one of the laws of physics.”