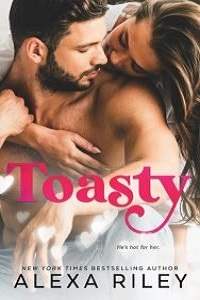 “Dance?” I pull my eyes from the dance floor to see Bruce standing next to my chair. I’ve been watching my sister most of the night because I can't help myself.

When I showed up today and saw her in the arms of a man, I almost lost my cool. The arms of a man I’d put her in. A man who was known to be a recluse with the reputation of an asshole. I thought he was going to be some seventy-year-old man when I sent her out here to see about renting his castle-like estate for a party my boss is hosting.

I couldn't get my foot in the door to talk to him, so it’s why I sent my little sister Pippa. She’s nothing but smiles and sweetness and has a way of getting people to do anything she asks. It’s endearing that she doesn't even know the power she wields. I was leery at first, but having spent the night watching the two of them, I know they really are in love.

“Come on. You can’t mope after other happy couples.” Bruce holds his hand out for me to take, and I do.

“I’m not moping. That’s my sister; I’m watching,” I answer as he pulls me toward the dance floor.

I should be checking on the party instead of dancing since it’s my job. My eyes flick over to where Mr. Cox has been sitting, but now there’s only an empty chair.

“I’m stealing the moment while assface is out of the room.” Bruce’s eyes go to where I’m looking and he twirls me away, making me laugh.

Bruce and Cox have a funny relationship. I only worked out that they were cousins a few months back. It makes sense now why Cox tolerates Bruce instead of ignoring him and banning him from our offices. I swear it’s his life goal to drive my boss crazy. I actually enjoy it and it’ll be one of the few things I’ll miss after I quit.

“Did you two ever get along?” I smile up at Bruce and I have no doubt I’m getting a death glare from every woman in the room. He’s charming but he always has a new woman on his arm and is a little too flirty for my taste. I don’t know why but I seem to fall for the brooding kind. I guess my sister and I have a type.

“We get along just fine.”

I laugh as he twirls me around again. I don’t think what they do is get along, but okay. I know better than to get between family.

“What are you doing?” Mr. Cox's voice is low and deadly, and goosebumps travel across my skin.

Normally, I’d stop whatever I was doing and answer him since he’s my boss. This is his party, or at least he’s hosting it. He hasn’t been acting like it’s a party with the way he’s sat in his chair all night watching everyone. I don’t know why he bothers to come if he won’t even let himself enjoy it.

“Are you sure you made those billions all by yourself?” Bruce tosses out. “Because anyone can see we’re dancing, dipshit.”

I can’t hold in the laugh and why should I? What’s he going to do, fire me for laughing? Have at it. It wouldn't be shocking because I’ve seen him fire people for less.

“Myra.” Cox says my name, but I ignore him. I don’t look at him because I don’t want to see his expression.

“She’s busy. Let the lady have some fun for once.”

I glance up at Bruce and bite my lip when I see his mischievous cocky smile. It’s the one that makes all the girls melt when he comes into our offices.

I gasp as Bruce is wrenched away from me and then he hits the floor. My mouth hangs open as I gape at Mr. Cox.

“You hit him.” I try to go and help Bruce off the floor but Cox’s hand wraps around my arm and his fingers dig into my bare skin.

“He had it coming,” Cox says through his teeth.

Bruce shrugs as he wipes a small trail of blood off his mouth, as if to say I did have it coming.

“You got me good.” He smirks as he picks himself up off the ground.

“I’m not fucking around. That was a warning shot.” Cox steps into Bruce’s space but he doesn't let go of my arm. I try and shake from his hold but he only tightens it.

“Can you let me go so you two can have your pissing match?” Mr. Cox jerks his head to look down at me with wide eyes.

He’s surprised by my comment but I don’t care. I’m done with him and over his shit. I’m not putting up with it even if the pay is crazy good. At one time I cared, but not anymore. I also don't have to worry about my little sister anymore and I don't need this job. He could block me from getting another job out of spite. He’s ruthless; it’s how he became one of the richest men in the world.