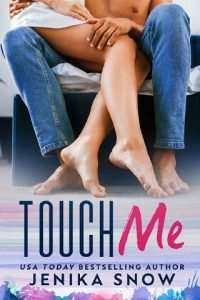 Freya Dresden stared at her stepmother, feeling small compared to the woman who intimidated her like no other. Even at the young age of fifteen, she hated that Meghan was who she had to look at for a mother figure and a father figure. Hell, Meghan was the only family she had left.

After her mom died when she was only three, her father had remarried, finding the woman he could spend the rest of his life with in the form of his personal assistant. Freya was happy her father had found someone and didn’t have to be alone.

But then the unthinkable happened. Not only was she motherless, but she’d become fatherless as well, and the only person she could rely on was Meghan in all her self-absorbed glory.

Meghan had been sweet at first, trying to befriend Freya because she clearly wanted her father and his money. But when a drunk driver T-boned her father’s car one rainy night, Freya lost her father at the tender age of thirteen. It had been two years since then, and here she was, sitting across from Meghan, watching her sweet-talk her new husband, Elijah.

If Freya could have gone to live with a relative, she would have left in a heartbeat, but she had no one else aside from this woman who didn’t want her, this woman who now had a legal responsibility because she’d married Freya’s father.

“You’re not hungry?” Elijah asked Freya. He was a nice man, a man who for whatever reason thought getting married to a self-centered, mean-spirited woman like Meghan was a good idea.

“No,” Freya said, pushing her plate of burnt toast and too-runny eggs Meghan had “cooked” away from her. She stared at the food as her stomach churned. “I prefer my eggs a little less active and my toast a little less black.”

Elijah started laughing, and that had Freya smiling. But the exasperated sound that left Meghan told her that her stepmother really wasn’t all that pleased with her husband and stepdaughter making jokes about her lack of cooking skills.

“I have to go to school anyway.” Freya couldn’t wait to turn eighteen. Then she could leave this place behind and let Meghan and Elijah have their perfect little life. They were still newlyweds, Freya assumed, seeing as they’d only been married a few months, but none of this concerned Freya.

She tried to keep her nose out of everything related to Meghan and focus on doing well in school so she could get a scholarship and live in a dorm—far away from this life. She just wanted to forget about everything she’d lost, everything she was forced to gain, and start over alone.

“I’ll take you. I have to go to the office early anyway,” Elijah said as he stood and smiled down at Freya.

“I’m okay to walk, really.” She grabbed her bag off the tiled floor and turned, making her way toward the front door. But before she could open the door, Elijah was there opening it for her.

“Ladies first,” he said with a grin. He was such a nice man, and Freya couldn’t understand why he’d want to marry someone as self-absorbed as Meghan. Ducking her head, Freya stepped out of the front door and murmured a thank you. She was minding her own business and biding her time by focusing on herself. She had three more years, and then she could get out of this damn house and away from Meghan, this town, and all the memories of what she didn’t have anymore.

They made their way over to his Range Rover. Elijah had money and owned his own company, which was most likely a very big reason Meghan married him.

Sitting in the vehicle while Elijah was on his way to her school, she let the silence surround her. She felt comfortable when nothing was said, when she was alone. But it was also sad because when she was alone, she thought about her mom and dad. She didn’t remember a lot about her mother since she’d died at such a young age, but Freya had a lot of happy memories of her dad that she clung to.

“I know Meghan can be a … pill.” He chuckled softly. “For lack of a better word. Believe me, I know.”

She looked her at him. Elijah was a big man, tall, muscular, with a head full of short black hair, and these intense green eyes that almost seemed unreal. Freya knew an attractive man when she saw one, and Elijah definitely was good-looking. But the fact he married Meghan, a woman who was beautiful on the outside but ugly on the inside, made her wonder. But he was nice, and it wasn’t fair to judge him because of the woman he decided to strap himself with.

“Can I ask you something?” Freya shifted toward him on the seat, holding her backpack in her lap, and saw him nod.