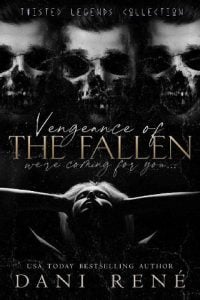 The Devil Within - Digital Daggers

Nothing At All - Rob Dougan

Nobody starts their life out as a killer.

No child wakes up one morning and announces he’s going to become a hitman.

But that’s where life has brought me. It’s in the eyes of my brothers in arms I find my humanity. If you can even call it that.

We’ve all three witnessed atrocities, and when we watched these violent acts unfolding, it wasn’t on a television screen, it was real life. Perhaps it’s why my mind broke. I’m certain it’s why Falcon and Hawk, my brothers by all standards that matter, hunger for the same revenge that I need.

We may not be blood, but we’re family all the same.

They are the only people I trust with my life. Because they know how precious it is. Being alive, it’s a gift, one that can be taken at any moment. It has brought us to the work we do. We know how to steal those last moments of someone’s light and snuff it out as if they’d never existed.

Most people who know us, fear us—and they should.

We can empty your bank account, find every dark, sordid secret you’ve ever had hidden away, and we’ll do it so we can get our payday. When your life is gone, there is no getting it back. Most times, we don’t have to kill those we’re hired to because once we’re done they want to die anyway.

It makes our lives much easier.

Wealthy people hire us to do their dirty work, and I don’t mind. I like to get my hands filthy. There’s honesty in what I do. With a swipe of my blade, with the pull of a trigger, I can take out anyone who stands in my way.

There is only one person who I haven’t killed yet, and it’s not for the lack of trying. He’s locked up tight in prison. I know he’ll get out; he has connections. One day, and I know the day will come, I’ll look him in the eye and watch the life drain from his face.

I want to bathe in his blood. It will be sweet vengeance.

In the darkness of the living room, I move to the balcony with a cigarette pressed between my lips. Outside, I flick the lighter and take a long, deep inhale. It’s as if I can see the smoke curling around my nerves, collecting in my lungs, and when I breathe it out, it billows like a cloud.

The apartment is draped in darkness, and I blend into my surroundings, dressed all in black as I stand guard. My watchful gaze is trained on the building across from me. I can see her moving around her flat. She’s oblivious to me. But she’ll soon learn danger lurks in the shadows.

Each night I come to the apartment we bought in the city only to watch her. This is our ticket to the one thing we’ve been wanting for years. At first, Falcon was concerned about my plan, but when I told him she’s the spawn of the most evil man we’d ever come across, he agreed.

I kept her a secret for months before I told my brothers. Something I have never done before. They know everything there is to know about me. I can’t explain it, but there is something about her I want to keep to myself. A piece of her which calls to me.

A pretty little blonde with angel eyes and pouty lips. Her body is sinful. Perhaps it’s the reason why I didn’t tell my brothers. Because I know the moment Falcon sees her, he’ll want to enjoy every curve.

My blood heats as she moves to the second bedroom of her apartment where she’ll log into her computer, touch herself, and come. Her orgasm will be real, and she’ll slowly come down from her high. But deep down the guilt will eat away at her like it does every time she does it. I watch the way she rushes from the room afterward. It happens at least twice a week. She’ll run to the main bedroom, cover herself in a robe, and curl up on a chair by the window as tears streak her cheeks.

Our Goldilocks is broken in ways I didn’t fathom. I had no idea what was going on the first few times it happened. It doesn’t stop my need to make her pay. Even if she begs for her life, she owes me one back. And I intend on taking.

I know who she really is.