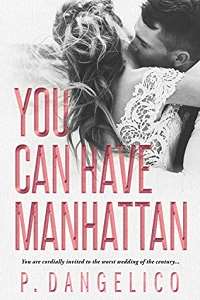 Life-changing moments rarely announce themselves. They prefer to sneak up and sucker punch you in the face by way of greeting. That’s how it happened to me. It started as a day like any other. Until it wasn’t. Until it turned into both the best and the worst day of my life.

“Look at me, Sydney,” Frank calmly ordered from across his desk.

Frank Blackstone was always calm and always giving orders which was why I ignored the request and continued typing on my smartphone. A small snag in a contract for a property we were acquiring––and what I mean by “we” is Blackstone Holdings––needed my immediate attention. In all likelihood, it was going to keep me working throughout the weekend once again, but such was life as general counsel of this company. Frank was always either buying or selling something, and I’d known what I was getting into when I took the job. Not only did it not bother me, but I relished it.

Holding up an index finger, I continued to type one-handed. I’d tried to reschedule our usual Friday morning meeting only to be told in no uncertain terms to get my butt over to his office pronto. So here I was––butt in the chair across from him pronto even though the contract snag had to be untangled before the end of the week.

Being a woman in a male-dominated business meant I was often underestimated and seldom given the respect I deserved. It didn’t bother me. On the contrary, I used it to my advantage and laughed all the way to the bank. I was accustomed to this nonsense and had remarkably thick skin when it came to business. This eleventh hour BS, however, was a downright insult to my intelligence and they were about to find out who they were dealing with.

“Put it down, Syd. I’m not going to ask again.” The impatience in his voice told me to wrap it up. Frank was not the type you wanted to keep waiting.

Hitting send, I placed the phone on the antique walnut desk that separated me from my boss and glanced up, my eyes meeting the dark eyes belonging to the man I worshipped and adored. Sighing, he leaned back in his chair. Like the man, Frank’s office was eclectic. The furniture American Colonial antiques, the art on the walls from the surrealism period, and the rugs Persian.

“Done. You were saying?”

He adjusted the white French cuffs of his signature Turnbull & Asser shirt, laced his hands together, and placed them on his trim midsection. “I said I’m dying.”

My smile dropped as I processed the claim one letter at a time. This had to be a joke. “Is this one of your pranks? Because I have a long day ahead of me and I really need to get some food before I go through the updated proposal and make sure they didn’t booby-trap it.”

I couldn’t keep the skepticism off my face, nor out of my voice. And I wouldn’t have asked if the man in question wasn’t famous for pulling pranks. Frank once threw a ridiculously lavish party for a thousand of the world’s richest people, then sent them a bill for their share of the cost. True story. When they refused to pay, he threatened to publicize it in his newspapers. Frank owned three. Everyone promptly wired the funds and Frank donated the ten million dollars to Child Find of America.

Was I privately pleased? Damn right, I was. Needless to say, Frank’s pranks were hilarious when I played accomplice. Not so much when the joke was on me.

“With a little luck I could live another twelve months…” He sighed. “…but I’m not betting on it.”

I couldn’t wrap my arms around all the feelings I was simultaneously experiencing. Whatever force was holding me up vanished. Slouching in the leather wing chair, I began to sweat in my black Jill Sanders suit while my mouth ran dry. Mostly because I knew Frank better than I knew myself and his expression told me he wasn’t fooling around.

Frank Blackstone was not only my employer, but a many other things as well. Mentor. Friend. Father figure. The closest thing to a father I’d ever had. And most importantly, the only person who had never let me down. I loved him. He’d taken a barely-out-of-law-school graduate and given me every chance to succeed. And succeed I had thanks to him, quickly climbing up the ranks at Blackstone to become Frank’s right hand. Being named general counsel of Blackstone Holdings at age thirty-four was an accomplishment few people could speak of and I would eternally be grateful to him.

“How?” Mired in shock, my voice sounded hollow.