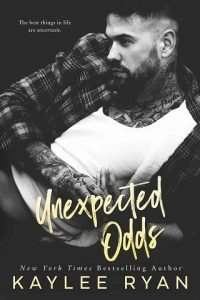 Tilting my beer to my lips, I peer over the bottle at the clock on the wall. Ten minutes after eleven. I’m late. Hell, I’m beyond late. I was supposed to meet her at seven. She goes back to school tomorrow, and this is our last night together. I told her I would be there, but instead, I’m here, sitting at Bottom’s Up, having a few beers with the guys. All of them none the wiser that I’m supposed to be meeting my… regular hookup? She’s not my girlfriend; we don’t label what we are.

This thing between us has been going on for over two years now. She was home from college break, her and a group of friends were here at Bottom’s Up having a few beers, we hit it off, I took her home. She stayed. We ended up spending the weekend in bed, and she went back to school. She came home for spring break and I ran into her at the gas station of all places. We hooked up while she was here, then she went back to school.

You get the idea. That’s how things have been between us for the last two years. That is until this summer. The last few weeks specifically. It’s starting to feel like… more. Fuck me, but I know it’s more, and instead of facing these feelings head-on, I’m drinking with the guys, and I know without a doubt she’s there waiting for me. I was supposed to meet her at a bed and breakfast a few towns over. I was dressed, ready to go and dreading this being the last time I see her until Christmas break. My heart was racing and my palms were sweating because I know, I know what she means to me. I’m just too afraid to admit it. Ridge called as soon as I was walking out the door, said the guys were getting together tonight for a few beers. They don’t know about her, and it gave me an excuse to delay saying goodbye to her.

I don’t want to say goodbye.

My gut twists when I think about not seeing her for months. I don’t know why this time is different, but it’s more, and I don’t do more. At least I haven’t. Me being here proved her mother right. I’m no good for her. She deserves better—that’s what she tells her. We’ve been sneaking around so she doesn’t have to hear that shit. Then again, I haven’t told anyone about her, so again, maybe her mom is right. She’s not a dirty little secret and shouldn’t be treated as such.

“Nothing. Just tired.” I hide the truth.

“You’ve been helping your dad a lot lately,” Tyler comments.

“What’s he going to do with that old thing?” Tyler asks.

“Mom’s trying to talk him into turning it into a venue, you know, for weddings and stuff like that.”

Ridge chuckles. “You think she’ll get her way?”

“Nah, my guess is that Dad’s going to turn it into an art studio for her. She loves to paint, and if you were to add some windows to the back, the view is the perfect backdrop. I’ve heard Mom tell us that a thousand times.”

My parents had a horse; Harry was his name. He was a Tennessee Walking Horse and Mom’s baby. He passed about a year ago, and they’ve decided no more horses, or animals at all in fact. They want to travel. So Dad’s been selling off the tack and tearing out the stalls. He doesn’t have to tell me that he’s making it a special place for her, that’s just Dad. That’s who he is. Mom is the love of his life, and there is no limit to what he’ll do to see her smile.

“She’s going to love that.” This from Tyler.

“Yeah.” I finish off my beer, pull a twenty out of my wallet, and place it on the table. “I’m going to head home. I told him I would be by early in the morning to help.” That’s not a lie. I’ve made her wait long enough, and I’m an asshole for it. I should have owned up and gone straight to her. Told her how I feel about her, and that this feels like more. Maybe we can try being official?

“You need us?” Mark offers.

“Sure, you know the way. I’m going to get there around nine.” Her flight leaves at eight. I mentally calculate how much time I wasted tonight and hate myself for it. “Stop by whenever.” With that, I’m out the door. Before I’ve even made it to my truck, I try calling her, but it goes to voice mail.