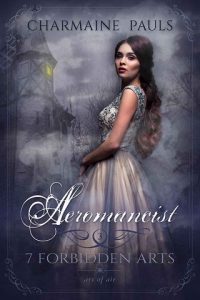 The air in the apartment was thick, not cool like when he was around. It had been two weeks since he’d left her, and Katherine White swore she’d lost her ability to breathe. All she wanted to do now was be sick. Fittingly. Her body was in withdrawal. What she needed was Lann Dréan’s touch. But she’d signed a contract not to contact him after thirty days. That was all he’d promised to give her. A month of the most incredible sex of her life.

“Come on, Kat,” Diana said, “you’ve been cooped up in here for two weeks. Come out for dinner with us. It’ll be fun.”

Kat swallowed down bile, trying not to vomit.

“I’ll just stay here with my head in the toilet,” Kat said, not looking at her roommate.

“Kat.” Diana crouched down next to her. “You haven’t been well since … well, since you know when.” She wiped Kat’s hair from her forehead. “I’m just trying to help.”

“I’m in no condition to go out, never mind eat. Besides, I’ve got to work. I’m behind with my research.”

Diana straightened and rested her hands on her hips. “Is that maybe because you haven’t been back to his library?”

Kat rolled her eyes at Diana’s determination not to speak Lann’s name, as if that was going to prevent Kat from missing him. “There are other libraries, you know.”

“Yeah.” Diana gave her a condemning look. “Not with the same material. Not with what you need. Besides, you haven’t been to any of those other libraries either. You haven’t been anywhere since he left.”

The wave of nausea Kat had been fighting broke. She emptied her stomach, the little of what she could manage at lunch, into the toilet.

When only dry heaves remained, Diana handed her a wet wipe and patted her shoulder.

Kat supported her back against the bathtub. “I’ve never had a stomach bug that lasted for seven days.”

“Kat?” Diana’s voice was soft. “I think you should consider an alternative reason for your condition.”

“Like what? Can’t be food poisoning. It doesn’t last this long. Besides, I don’t have a fever.”

Diana sat down next to her. “I was thinking along the lines of doing a pregnancy test.”

Kat looked up quickly. “Impossible. I told you he’s infertile.”

“You haven’t had your period.”

“I’m never regular. Lann wouldn’t lie to me. I trust him. Completely.”

Diana shrugged. “Then it can’t hurt to do a test.”

“All right.” Diana got to her feet again. “Tell you what, I’ll stay in with you tonight. I’ll heat up some tomato soup, as that’s all you seem to tolerate these days, and we’ll watch a movie on TV. But before that, I’m going to the pharmacy.”

Thirty minutes later, Kat sat on the closed lid of the toilet. She stared at her reflection in the mirror and didn’t recognize herself. Her usually tanned skin was pale, making her eyes appear a brighter blue than normal, and her red hair was a tangled mess that fell to her waist. This wasn’t the girl who’d welcomed Lann into her life just over a month ago. That person was in charge of her life, knew what she wanted, and where she was headed. What reflected back at her, this washed-out version of herself, was the woman he’d walked out on.

“Why would he have lied to me?” Kat pushed to her feet. “He isn’t like that.”

“Maybe he’s not like you think he is,” Diana said sternly. She hugged her friend. “Come. We’ll work it out. First things first. Let’s go make you something to eat. You must be starving.”

In the kitchen, Kat took a seat by the table, her head in her hands, while Diana heated a tin of tomato soup in a casserole on the stove.

“What will you do?” Diana asked, her voice sympathetic.

“I have to do a blood test to be sure. If it’s positive, I’ll have to tell him.”

What Kat didn’t say was that she didn’t need the blood test to be sure. Deep down, she already knew the truth she tried so hard to deny. She was pregnant. It didn’t make sense, and yet, it did. They hadn’t used protection because Lann had told her he was infertile. If he only wanted a thirty-day fling, why would he have lied?

“You could just say nothing if you never want to see him again,” Diana offered.

“He has a right to know.” She added tersely, “And I have a right to answers.”

She didn’t go back on her word or break her contracts, but this was an exceptional condition. She picked up her phone.

“What are you doing?” Diana asked.