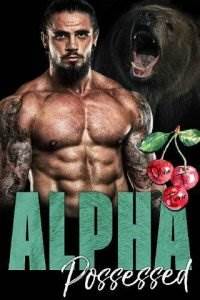 I head over to the bar like I’m just another one of the Belgrade Springs locals, but my wobbly feet in these new cowboy boots, the designer purse slung over my shoulder, and the hanging tag that I forgot to rip off my spotless flannel shirt is all threatening to give me away.

Luckily, none of the locals at the Rub-A-Dub-Pub are paying any attention to me, from the hot guys playing pool in the back, to the hot bartender pouring a beer, to the three hot guys at the table by the empty fireplace.

Man, there are a lot of hot guys here. Maybe I should do a story on that.

I suck in a deep breath as I take a few more wobbly steps in these boots that are digging into my ankles.

Ignore the hot guys and focus, Mary. You have a notorious mercenary killer to catch.

“Oomph,” I grunt as I sit down at the bar beside a lady in her forties who’s drinking alone. “What a day, right?”

She raises her eyebrow as she looks at me skeptically and then turns back to her beer without a word.

“I love this song,” I say, nodding my head to the country tune belting out of the jukebox. They still make those?

“Who sings it?” she asks with narrowed eyes.

“That… guy,” I say with a cool, nonchalant, totally-not-panicking nod of my head. “The one with the cowboy hat who always sings about his truck.”

“Totally,” I say as I scooch over to my new friend. “Like the guys in here. Holy crap, they’re gorgeous. What are you doing sitting alone?”

She looks around the bar with a sigh. “You know the guys around here… They only have eyes for the one.”

Her eyes narrow on me. “You from around here?”

I’m about to choke out a lie when the bartender comes to save me.

“What can I get you?” the big man with a huge bear paw tattoo on his thick neck asks. He’s enormous. I have to lean my head back to look into his light blue eyes. He should be on an NFL field dolling out concussions instead of behind this bar in the middle of nowhere Montana.

“I’ll take a white wine,” I say. Shit. The bartender and my new friend are both looking at me like I’ve just committed a cardinal sin. “If you have any…”

He leans down and opens the small fridge in the counter. I gulp when I see the hulking size of his back muscles through his shirt.

“I think there’s one back here,” he says as he pulls a wine bottle out that looks like it was opened sometime in the eighties with the missing label and orange color. “Want to try it?”

“I’ll just have what she’s having,” I say with a bad taste in my mouth. “And another one for my friend.”

I get out two twenties as he pours the beers and drops them in front of us.

“What’s this?” He’s not taking them. Why isn’t he taking them? Do they have their own currency in this mountain town or something? Are people paying with cartons of eggs or bags of grains?

“Money… Did I not get enough?”

I’m pulling out another twenty when he laughs. “It’s two-fifty a beer lady. You owe me five bucks.”

I pay for the beers, give him a five dollar tip, and stuff the rest of the money back into my purse.

“You’re definitely not from around here,” the woman says as she finishes her beer and takes the new one. “Thanks for the drink.”

“Where I come from, these beers would cost thirteen bucks each.”

“It might as well be compared to here,” I say with a laugh. “New York City.”

“Ahhh,” she says with a nod. “I was wondering why your boots didn’t have a lick of mud on them.”

The whole pretending to be a local angle isn’t working, so I might as well be honest. My new friend doesn’t look like someone who appreciates being lied to.

We shake hands and then settle in with our beers. Whoa, that’s strong…

I might have been better off going with the orange swill from the back of the fridge.

“You here on vacation?” Lorraine asks.

“I’m actually here for work,” I say. “I’m a reporter. Tracking down a big story…”

“Hmm,” she grunts as she takes another sip.

“Perhaps you can help me?”

“Maybe… Do you know a lot of people here in town?”

“I work the till at the grocery store, honey. I know everybody.”

I take a nervous breath. “What about the Dixon boys?”