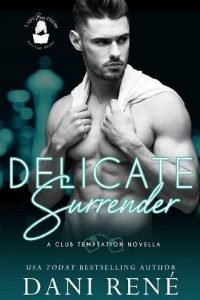 I watch the pretty nineteen-year-old girl standing on the podium as she belts out a song. Her voice is trained from years of voice coaches and her mother’s constant support to get her to a level that most kids her age don’t get to until they’re in their mid-twenties.

When she finishes up her final chorus, silence falls around us and I give her the thumbs-up. Her smile is bright, hopeful, and I know if I said anything negative right now, it would shatter her dreams. I’ve been working as a mentor for ten years, and as I near forty, it seems my students only get younger each year. Keeping it professional is part of my job. That’s why my clients trust me. Shaking my head, I lure my eyes away from the buxom blonde who’s now perched on a high stool, causing her short skirt to ride up her milky thighs.

“I think that’s the one,” I tell her, hoping she doesn’t want another go at the goddamned chorus that sounded perfect to me. But then again, I know what it’s like when you want your work to be one hundred percent.

“Thanks, Gideon.” She grins playfully, but I know I can’t do anything about it. She’s legal, barely, but if I were to give any indication I’m interested in her, I know this girl will be up for it. However, she would balk at what I’d like to do to her.

Tonight, I’ll have to pay a visit to Temptation, a club where I can take the edge off. It’s been weeks since I’ve been in a playroom with a beauty, and it’s time I break my celibacy for a night of toying with someone who wants and craves it.

Glancing at my watch, I offer a quick wave before hitting the button on the sound board. “I have a meeting. I’ll see you tomorrow.” Before she has a moment to respond, I’m out the door and heading down the hallway to my office. Pulling out my phone, I scroll to a friend’s number and hit dial.

When his deep voice comes across the line, I grin. “Hello, Gideon. It’s been a long time.” Oliver Michaelson is an old friend whom I haven’t seen in a long while. He’s one of the men I met when I first lived in Chicago, and since I left and made my way to Seattle for work, he and I haven’t seen each other as much as I’d like.

“It has been. I heard a rumor you’re in Seattle,” I say as I settle behind my desk. The expensive leather chair leans back as I twist and take in the city from the floor-to-ceiling windows.

“I am. Had a meeting with a potential client,” he informs me. “Are you free for a drink, or even a scene?”

Breathing a sigh of relief, I nod to myself. “I am, very much so. It will be like old times.”

He chuckles. “Then it’s a date. I’m alone since Chance isn’t with me, but we can find a pretty girl to toy with.”

“That sounds like my kind of night. I hope Chance is doing well.” Oliver and Chance have been together for a few years now, and even though they are in a relationship, I know Oliver still trains female submissives, whereas Chance is exclusively his.

The dynamic isn’t one I would be comfortable with, in my own life, but it works for them. I applaud people who are not stuck in the usual societal norms.

“He is, thanks for asking. I’m going to let him know I’m meeting up with you, and then I’ll see you at about seven.”

“That works for me. Looking forward to it,” I tell him, and it’s true.

“Text me the address of the club.”

“Will do.” We hang up and I’m already grinning from ear to ear at the thought of enjoying a scene with an old friend.

Tonight, I’ll find someone who can grab my attention, ease the frustration that’s knotted through every inch of me, and unwind. Tomorrow I have a new student coming in and I need to be on top of my game.

Shrugging on my jacket after exiting the car, I make my way toward the door that’s currently hiding just what I need. A few beautiful submissives to choose from who need a good spanking or two. I never planned on being in the lifestyle, but when the opportunity knocked at my door, I answered willingly. I found the kind of pleasure I never knew I could experience. Diving headfirst into the intensity, I took my first submissive when I was twenty-one.