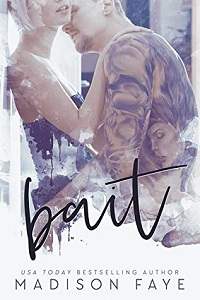 The classroom is silent except for the nearly invisible ticking of the big black and white clock up above the blackboard.

It’s almost midnight, which means it’s almost time. Besides being near-silent, the classroom where by day we’re taught U.S. Government and Policy is also basically empty. I mean, of course it is—it’s nearly midnight, on a school night at that. And even with as prestigious and driven a place as Winchester Academy, midnight is still kind of pushing it to be in a high school classroom.

But then, I’m not here to learn. I’m here for detention.

He’s only been here this one semester, but already, Professor Bard’s made a name for himself as, well, maybe a bit of a hard-ass. He’s not an asshole, and nothing he does or says is over the line at all. He just doesn’t take any bullshit in his classroom, and at place like Winchester Academy, full of quite possibly some of the most affluent, connected, spoiled, and arrogant private high school students in the country, that’s no easy feat.

But even if they give other teachers a hard time, the students of Winchester are models of respect and attention when they enter Oliver Bard’s classroom. Maybe it’s those piercing, gorgeous blue eyes of him—like mountain ice or blue fire. Maybe it’s the firm, chiseled jaw, and the perfect cheekbones. Or it’s possible that in this place of old money wealth and traditions, with the strictly enforced dress code, and no visible piercings, and skirts being no more than two inches above the knee—they check—and staunchly formal and conservative teachers, Professor Bard breaks the mold in a major way.

…I mean, there aren’t any other professors I know of at Winchester who have two full sleeves of tattoos.

And beyond all of that, if you still want to act like a clown in Professor Bard’s classroom, there’s this, where I am now: his legendary “midnight detention.” And it’s exactly what it sounds like. As seniors, we can be out of the dorms later than underclassmen, provided we’re working on a school-related activity, and that we stay on Winchester’s sprawling, ivy-covered campus. And Professor Bard has exploited that to the fullest with his midnight detentions. You show up at ten, and you don’t leave until one in the fucking morning. No ifs, ands, or buts.

…Of course, leaving a pair of my panties in his desk drawer, right on top of his pens and his favorite red marker for grading papers, where I knew he’d find it last week?

Yeah, that may have something to do with it too.

I glance at the clock, and my pulse skips a little bit.

So close. It’s almost time. I swallow thickly, my skin tingling as my hands drop to my lap. I smooth my plaid skirt down nervously, or maybe excitedly. Probably both. My toes curl in my flats, my sock-covered knees rubbing together as I glance at the clock again, and then around the empty classroom, and then up to the front, to him.

Oliver Bard is sitting at his desk—back straight, his jaw tight, and his eyes moving over the papers he’s grading. His jacket is off—even professors have a dress code at Winchester—but he’s got his sleeves rolled up to just under the elbow. I bite my lip as my eyes dart over the ink covering his muscled forearms, watching them ripple as he writes. His raises one hand, sliding his fingers through his thick dark hair, his perfect lips murmuring to himself as he reads.

Just a few minutes to go, and my pulse skips again, the anticipation shivering through me like wildfire in my veins. Nervousness. Excitement. Eagerness.

…We both know why I’m here.

We both know what’s going to happen tonight, as soon as the time clicks over to midnight, and into tomorrow. We’ve never spoken the words out loud. We haven’t written them down. But we both know.

It’s obvious. It’s so thick in the air you could cut it with a knife. It’s barely contained in the ways his eyes have lingered on me for the last half hour.

…Or, the last four months before it. Back before, when even looking was forbidden, and touching would be a crime.

At midnight, it won’t be a crime.

At midnight, I’ll be legal.

Of course, in my opinion, it’s not a crime if I’m willing—if I’ve practically been begging for it. If I’ve all but walked up to him, taken my clothes off, grabbed his bulge, and slid into his lap. But it would have been. Legally speaking, I guess. Morally? Well, that depends where your compass is. Most would call it wrong—deplorable, maybe. Fucked up. Perverted. Utterly reprehensible. If we’d acted on what we’ve barely kept hidden behind our eyes, and if it’d been discovered, he’d be in a lot of trouble. Jobless, for sure, and maybe jail. I’d have gotten some of the mess on me, but we all know it wouldn’t have stuck. For him? It’d have followed him the rest of his life. They’d look at him as a predator, and me, the victim.