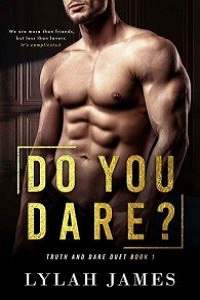 His presence was a warm heat behind me as we walked into the bar. He was close, really fucking close. I could feel him. I could smell him. He was so close, yet so far out of reach. A dangerous temptation dangling right in front of me.

I wanted to turn around and wrap my arms around him, bask in his warmth. We’ve hugged and cuddled plenty of times before, but since the Charity Gala, everything has been different.

He has been different.

Somehow, there was a wall between us now. I couldn’t break it or walk around it. It was exhausting and scary – watching the change in him, seeing him so…cold and withdrawn from me. Sometimes, it felt like he was battling something inside his head. I waited silently for him to come to me, to speak of his worries, so I could find a way to soothe him. Like always.

Except…it started to feel as if I was the problem. As if he was hiding from me.

A week in Paris. This was supposed to be fun and exciting. An adventure for us. Day one and it was already going to waste.

I chewed on my bottom lip as we walked further inside the dim room. It wasn’t overly crowded, but everyone here looked fancy. After all, this was one of the famous hotels of Paris; wealthy and posh people came here often. “I didn’t think the hotel would have its own bar. Fancy. I like it.”

“It’s nice,” he replied. There was a roughness in his voice, except his tone was robotic. No emotions whatsoever.

What’s wrong with you? What did I do?

I paused in my steps, expecting him to bump into me. He didn’t. Instead, I felt his arm slide around my waist as he curled it around me. Our bodies collided together softly, and I sucked in a quiet breath. His rock-hard chest was to my back, pressing against me, and I could feel every intake of breath he took. His touch was a sweet, sweet torture.

“This way.” His lips lingered near my ear as he whispered the words. He steered me toward the bar stools.

We sat side by side. From the corner of my eye, I watched him as he ordered our drinks. His voice was smooth, and it slid over my skin like silk. Soft and gentle.

Lost in my thoughts, I didn’t notice the man standing next to me until his hand touched my shoulder. I swiveled to the left, my eyes catching the intruder. Yes, intruder. He was interrupting my time with him.

Maddox Coulter – the balm to my soul but also the stinging pain in my chest. He was sweet heaven and the bane of my existence.

“Remember me?” the man in the suit asked with a tiny grin.

Yup, I did. He was the owner of the hotel. We met him when we checked in yesterday.

“I saw you across the bar, and I knew instantly, you had to be the pretty girl I met last night.” His English was perfect, but it was laced with a husky French accent. I had to admit, it was kind of sexy. Mr. Frenchman stood between our stools, separating Maddox and me. He blocked my view of Maddox and I. Did. Not. Like. That.

“Thank you for helping us yesterday,” I replied sweetly, masking my irritation.

His emerald eyes glimmered, and his grin widened. Mr. Frenchman was your typical tall, dark, and handsome eye candy. And he wore an expensive suit that molded to his body quite nicely. “It was all my pleasure.”

I nodded, a little lost at what else I could say. I wasn’t shy or uncomfortable around men. But this one was a little too close for my liking, and since I had zero interest in him, even though he could definitely be my type, given the fact that someone else had all my attention, I didn’t want to continue this conversation.

“Lucien Mikael.” He presented me with his hand. I remembered he told us his name last night, but I didn’t tell him mine.

I took his palm in mine, shaking it. “You can call me, Lila. It’s nice to make your acquaintance.”

Instead of shaking my hand, he turned it over and brought my hand to his lips. He kissed the back of it, his lips lingering there for a second too long. His eyes met mine over our entwined hands. “My pleasure, ma belle.”

I glanced around Lucien and saw that Maddox was lounging back in his stool, his long legs stretched out in front of him, a drink in his hand, and he was staring directly at me. His face was expressionless.