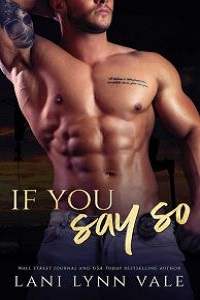 I let a short dude cuddle me once. It felt like I had a backpack on.

I smiled at Malachi, knowing that he would.

Then Malachi was gone, leaving me with Luca, who was staring at me like he’d just killed my puppy.

He walked to me, pressing his forehead against mine as he cupped the sides of my face, and exhaled softly.

I closed my eyes at those words.

I was in an online support group for military wives and girlfriends.

My post last week had gone something like this: My fiancé is leaving for two years. He’s going to be gone while I finish my schooling. The announcement of his impending departure came as a rather large surprise, and we didn’t have a chance to marry. Now, he’s leaving in three days, and I’m being left behind. What do I do?

The responses had varied, but all of them had an underlying tone of ‘don’t cry and make him feel bad for leaving. It’s not his fault. Be strong. Fall apart when he’s gone.’

So that was what I was going to do.

I was going to be strong now.

And once he was gone, then I would fall apart.

He used his thumbs to tip my chin up. Then his mouth was on mine, and everything really was okay with the world.

For a few seconds, everything was perfect.

Then his lips left mine when the announcement of his departure was only thirty minutes away.

The moment his hands left my face, my heart started to pound.

He took a step back, and I took him in one more time, in all his uniformed glory.

“Come back to me,” I told him. “Exactly like this. Whole and healthy. When you get back, we’re getting married. And then we’ll have babies.”

His grin was nothing short of magnificent.

“Lots and lots of babies.”

Then he was gone.

His friend, Malachi, who’d waited for him since they were leaving together, waved and then they both rounded the corner of the building, rendering me unable to see them any longer.

And the worst, most god awful feeling washed over me.

Panic set in, and my hands started shaking.

“Keep it together, girl,” my dad, Coke Solomon, warned.

“The worst sense of foreboding just rocketed through me,” I rasped. “As if that’s the last time I’ll ever see them together.”

My dad’s arm went around my neck, and he pulled me into his hard chest.

“It’ll be okay,” he promised. “You just gotta have faith.”

I’d be faithful as fuck.

“I’m scared,” I whispered, feeling the tears start to well.

I was just about to turn around and leave when Luca came barreling around the corner.

My breath hitched, and my dad let me go.

Before I could even ask him what was up, he once again had me in his arms.

“One last hug,” he said breathlessly.

I laughed, wrapped my arms around his neck, and kissed his temple, slightly dislodging his hat.

Then, just as quickly, he set me down.

Then, for good this time, he was gone.

I just had no idea how gone he really was.

One and a half years ago

I smiled, so happy to see my fiancé’s parents on the doorstep that I ran to them and wrapped them in a hug without first taking in the look on both of their faces.

I’d started my first year of residency just yesterday, and I was a mess.

After eight years of school crammed into five years—sometimes it really paid to be a genius—one would think that residency training would be a piece of cake.

Let me tell you something. It wasn’t.

It was hard. The hours were long and grueling, and everybody looked at and treated me like a child.

Then again, compared to most of them, I was.

Needless to say, I was a child in their eyes.

It felt good to see Gabe and Ember, though.

I hadn’t realized how much I’d needed a hug until they were squeezing me like their life depended on it.

“I had a really bad day yesterday,” I said, throat closing as I remembered. “And now you’re here, and whew, it was like that bad day is just erased.”

I slowly let them go and stepped back, a large, jovial smile on my face.

That smile fell right off when I saw that Ember was crying, and Gabe was looking at me like I’d just slapped him.