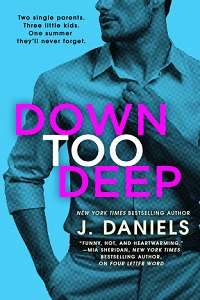 My phone vibrated against the dark oak of the bar, pulling me out of the memory I frequently lost myself in. I blinked the room into focus, palmed the device, and slid my thumb across the screen as I took a generous sip of whiskey.

Get your ass home

My father’s text read as an order and was meant to be taken as one. It was also a message I’d been expecting for a long fucking time. I was shocked it hadn’t come sooner.

He was finally stepping in. The man who never bit his tongue around me had been unusually tolerant of my shit the past twenty-two months. But now he’d reached his limit—or, more likely, my mother had. She’d never say anything to me directly, of course. She would see my guilt and cave, allowing this to drag on indefinitely. Her only option was my father.

He was the better choice anyway. She knew I always listened to him. At least, I did before, back when we actually spoke to each other.

I pushed off the stool I’d been occupying for the past two hours and drained the remainder of my drink, dug the wallet out of my back pocket, and dropped two twenties on the bar, catching Levi’s attention.

We weren’t friends. I didn’t know the guy outside of this building. But when you frequent the same bar nearly every night, you pick up a few names.

“Thanks, man. I’ll see ya tomorrow.” Levi swiped the money off the wood and wiped the bar down with a rag.

“No,” I said, palming my phone and reading the text again. I met Levi’s gaze. “You won’t.”

“We’ve raised our children, Nathan. Your mother and I are too old for this. We’re supposed to be enjoying our retirement, but we haven’t been able to do that, now, have we?” My father’s voice echoed off the vaulted ceiling of my family room and loomed over me like thunderclouds.

He wasn’t screaming. He didn’t need to. His voice carried no matter what volume he used, and truth be told, he could’ve whispered this shit to me and I would’ve heard it as loud as I was hearing it now.

The truth was deafening.

“Now, we love that little girl—you know we do—and this is breaking your mother’s heart, but I can’t take this shit anymore. I’ve kept my mouth shut for long enough. You have a responsibility, Nathan. Marley needs you. Hell, she’s needed you, and you are goddamned lucky she hasn’t been damaged by this already. You can thank your mother for that—the beautiful angel that she is. She’s put her life on hold for nearly two years while you’ve been doing everything except what you need to be doing, and—are you even listening to me right now, Nathan? Nathan.” He grabbed my shoulder and shook me.

I barely reacted, slowly tipping my head back to peer up at him where he stood. I couldn’t get angry. I’d seen this coming.

“Good. Because this ends now.” He braced his hand on the back of the chair I was sitting in and bent closer, getting in my face.

My father was a big man. A former college linebacker who didn’t look like he was pushing sixty-five. Two years ago, I would’ve shifted in my seat having him this close to me. Now I didn’t even blink.

“We’re giving you through Memorial Day, and then I’m taking that woman on a much-deserved vacation far away from here, and when we get home, we’re going back to being grandparents who visit with their grandchildren. Our child-rearing days are over, son. It’s time you step up. There is absolutely no reason why you should be at that restaurant as much as you are. This is long overdue.”

Shock overwhelmed me. I felt my teeth clench as my back went rigid against the leather cushion. “You’re giving me six days? That’s not enough time for me to line something up.”

“We’ve given you almost two years. I think that’s more than enough time.”

“Reasonable?” His eyes narrowed. “How about you be the man I raised, because I don’t even know who the hell I’m looking at anymore. I can smell the alcohol on you, Nathan. You’re lucky I didn’t call you on this shit a long time ago.”

I was getting bold. There was a time I’d never take issue with anything my father did or the way he decided to do it. Right now, I didn’t even care if he hit me. I had checked out.

“I don’t question how a man needs to grieve his wife,” he answered without pause. “That’s something I don’t have experience with, and I pray to God I never will. But life moves on, son, and you gotta move with it. The drinking stops now. That won’t give you what you’re looking for. There’s no changing what happened.”