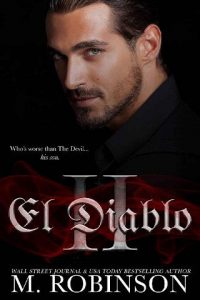 With a wide stare, my eyes tore from one nightmare to the next. Shifting my gaze to the path of their wrath, I gasped loudly. Unable to hold in my emotions, suffocating for my next breath.

All the blood drained from my veins.

I was suddenly freezing.

My feet were glued to the goddamn dirty floor beneath me. Dragging me straight into Hell where the devil wanted me home.

Our eyes stayed connected for several seconds. Fuck, it could have been hours. Time just sort of stood still. It wasn’t until my eyes lifted to theirs, that I didn’t think twice about it.

I fell to my knees and begged, “Please.”

Tears escaped my eyes, there was no hiding them. I’d never felt devastation quite like this. It was ripping me apart, crushing my bones, tearing me to shreds.

I was a pile of ash.

I thought I knew it all, had seen it all, experienced it all.

“I’m begging you.” There was no hesitation in my decision when I spoke with conviction…

“Pero, Papá!” my older sister Adriana shouted, “But, Dad!” loud and fucking clear in Spanish. The sharp sting of her disrespectful tone bounced off the living room walls of our home.

If there was one thing our father demanded, it was respect in his presence.

“You cannot continue to do this to me! I’m twenty-two years old! An adult! Non puoi!” she raged. “You can’t,” in Italian.

Adriana only did this when she was rip-roaring mad, fucking fuming from the inside out. She’d start speaking in Spanish, Italian, or English—any languages we were fluent in. It was like her mind couldn’t process her thoughts fast enough, so she’d spit fire in whatever dialect formed first.

He narrowed his intense, beady eyes at her. His stare taking her in with the intimidating demeanor we all knew and had experienced firsthand.

Especially me, his only son.

In one breath, he reminded, “I can do whatever I please, Adriana. Who’s going to stop me? You?” he mocked in a condescending tone.

Her short fuse wasn’t going over well. It never did with him. Not that it ever stopped either of us from stoking the flame.

What did our father expect from his offspring? His blood ran through our veins. We were exactly like him.

Proudly showcasing it more in moments like these where we’d question his authority. Making our demands known. The outcome of our argument never mattered. It was the war inside our souls that needed to be set free.

At the age of twenty-one, I was less than a year younger than my sister. The older we became, the harder it was for him to control us. It didn’t help that he guarded Adriana like a rabid dog, ready to tear anyone who crossed her path to shreds with his bare teeth. Never thinking twice about it.

We both knew it too.

In the eyes of the law, she was an adult. Though it didn’t matter, our father still treated her like a little girl. Case in point, she still lived at home with no hope of moving out anytime soon. He controlled every aspect of her life and had no plans to change the rules he set forth upon her since she was conceived.

However, he was much different with his only son. Our father didn’t place a shield in front of me like he did with my sister. If anything, he let me do whatever the fuck I pleased. Always saying he’d raised a man to take care of what was his.

He expected—no demanded—I protected Adriana and our mother with each breath, including my last if necessary. With my help, our father sheltered Adriana from the world.

I, on the other hand, was taught that fear of anything or anyone wasn’t an option.

Maybe it was the symbolism behind my name. Crucifixio, which meant cross in Spanish. His mother, my late grandmother, wore a silver cross around her neck her whole life from El Barrio, the streets of Colombia, to the United States of America, the land of the free and the home of the brave.

I’d heard all the stories. My grandfather migrated to the US to divide and conquer. He was God in the land of his greedy disciples, who chomped at the bit to have his head on a silver fucking platter.

Keep your friends close and your enemies closer.

My father wore the heirloom until the time came for my mother to wear it around her neck. To protect her from his hell. Something our father did best, and I wasn’t talking about his life.

Her roar hushed the devil.

Or should I say…

Once I was born, the cross was passed down to me, and I never took it off.

Adriana met his eyes, fully aware if she didn’t, he’d demand it of her. Standing her ground, she held her head high in defiance. If I noticed Adriana’s challenging stance, he sure as hell did too.