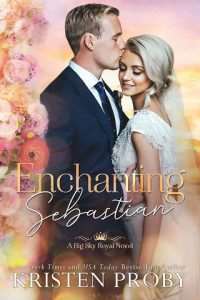 “RUNNING AWAY WON’T change anything.”

I’m running. Mum isn’t wrong. I’m a few months away from my thirty-fifth birthday, unwed, and on the precipice of having a marriage arranged for me, thanks to British law.

I’m the heir to the throne.

I need to be married by thirty-five, or a suitable wife will be found for me.

“Sebastian, you have duties—”

“I love you, Mum. And trust me when I say, I’m well aware of my duty. It’s been drilled into me since I was in nappies. I’m not running, I’m taking a holiday.”

“How long will you be gone?”

I turn to find my mother’s disapproving gaze on me. As the Queen,, my mother is stern, regal, and formal.

But in private, she’s kind, happy, and an amazing mum. Her four children adore her.

“Your father will be livid if you leave the country now.”

“Father is usually angry about something.”

Stiff, distant, and imposing, the king is a force to be reckoned with; it doesn’t matter whether you’re a member of state or his child.

I respect him as my king, but as a father…I barely know him.

“At least tell me what your plans are,” Mum says, laying her hand on my arm. “Tell me you’ll be home by your birthday.”

“I will not have my wife chosen for me. I don’t care what the law says.”

“If you marry someone who is not a citizen—”

“I’ll have to abdicate,” I finish for her. As the eldest son of a king, I’ve been groomed to take over the throne. But I don’t want it.

“We need to discuss this.”

“There’s nothing to discuss.” I set my bag aside and place my hands on her shoulders, smiling down at her gently. “I love you, Mum. Everything’s going to be fine, I promise.”

“Tell me where you’re going.”

She gapes at me. “The United States?”

“That’s where Montana is, yes.”

“You just returned from there.”

“Several months ago,” I remind her. “I’ve always been the traveler of the family. This isn’t really that unusual for me.”

“Oh, Sebastian. I hope you know what you’re doing.”

I kiss her cheek, pick up my bag, and walk out of my flat in the palace, heading down the hall in the direction of where a car is waiting to take me to my plane.

I hope I know what I’m doing, as well.

Silence. I’m sitting at a table with three of my closest friends, and all I get for my announcement is blank stares.

“You’ve been married twice,” I remind her.

“I’m just saying,” Willa continues, “that after my first husband was killed, I didn’t think I’d ever get married again.”

“I definitely didn’t plan to get married,” Fallon agrees. “But then I met Noah, and have you seen him?”

I sit and stare at my friends. Jenna’s married to my brother, making her my sister-in-law. And despite the fact that I initially—and erroneously—thought she wasn’t right for him, she’s the best ever. I can’t imagine our lives without her.

As my yoga instructor, I see Fallon more than anyone else, and she’s quickly become one of my closest friends.

“Why don’t you think you’ll get married?” Jenna asks before taking a bite of a delicious huckleberry scone. I know it’s delicious because I just devoured one myself and am thinking about going back for another.

“It’s just a lot of pomp and circumstance for a legal contract. Also, what if it turns out he’s an asshole? Or he can’t stand me? Then we have to pay a bunch of money for a divorce. It all just sounds expensive and annoying.”

“You’re such a romantic,” Willa says with a snort.

“I’m really not,” I say, shaking my head. “I know most girls love the romance stuff. But not me.”

“You don’t like it when a man brings you flowers?” Jenna demands.

“Or surprises you with fun things?” Willa adds.

“Or, you know, has sweet, slow sex with you?” Fallon asks.

No one’s ever done those things for me.

And I’ve done just fine without them in my thirty-one years on this planet, thank you very much.

“It’s all a front,” I say at last. “It’s window coverings. I just want to get to the nitty-gritty and then get on with my life.”

“So not a romantic,” Willa mutters and finishes her coffee. “And that’s okay. Not everyone is. But you never know, someone might eventually come along and give you butterflies and thoughts of happily ever after.”

“She’s a lost cause when it comes to love,” Jenna informs her. “But that’s okay. We’ll keep her around.”

“Thanks.” I laugh and decide to forgo the extra scone. I’ve been slacking on the exercise front and need to get myself under control. “What are you guys up to the rest of the day?”