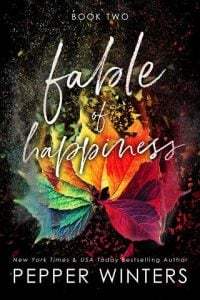 “Live your questions now, and perhaps even without knowing it, you will live along some distance days into your answers.”

WHO WOULD HAVE GUESSED that the victim could become the villain?

That one choice could derail not just one life but two. And not just derail but cause a catastrophic annihilation—an annihilation neither party could survive.

All I wanted was to go home.

I’d fought for that. Schemed for that.

And when I’d finally earned it...I had to make the hardest choice imaginable.

I was the reason he fell off that cliff.

He was the reason I turned my back on my freedom.

SOMEONE, ONCE UPON A time, said life flashed before the eyes of a person about to die.

I had news for that guy.

And it didn’t flash with my fondest moments as I lost my footing and fell off the cliff.

Maybe it was because I had no fond memories.

Perhaps I’d spent too long erasing my life that it honored my wishes to remain forgotten in my final seconds.

Or maybe...maybe, I was never meant to have a life at all.

Death had shadowed me since I was born.

It’d been the reason I had no childhood, why I’d been a slave, and why, when I’d finally found someone who had the power to affect me, I was about to die.

The Grim Reaper had finally found me.

Trees whacked me, rocks pummelled me, air carried me to the end.

Twisting, turning, a rag doll with no direction.

I didn’t fight it. I stayed limp, accepting, ready.

I closed my eyes on the falling blur.

Three things I thought of before the ground caught me.

One, I’d honored my promise and kept my Fable family safe.

Two, I was glad, glad I no longer had to fight.

Well, three was the only wince in my entire death experience.

It was about her.

She was the reason my end had come.

She’d cursed me, and now she was free.

Hatred existed between us, lust and need, confusion and fear.

But the simple fact was if life had been kinder, if I had been less of what I was and more of what she deserved, things might have worked out differently.

If I was braver.

If I was saner.

If I hadn’t trapped her or used her or thought I could own her like I’d been owned by others, she might have stayed.

And I might’ve fallen hopelessly in love with her.

I FELL TO MY KNEES.

Blank shock numbed me. My mind couldn’t decipher what’d just happened. An awful kind of hissing erupted in my ears. A static white noise that trickled into my bloodstream and made every bone twitch.

I shook my head. My mouth parted. My heart raced.

I blinked, expecting him to still be there. Smirking that mocking grin, long hair touching his shoulders, eyes so dark with history they defied common color.

But he didn’t appear.

Just me and the fading energy of a man who’d imprisoned me.

A man I just killed.

My heart cramped as I wedged fists into my belly.

What have I done?

Yes, he’d taken my body and my freedom, but I’d done something a million times worse....I’d taken his life.

Wait, he could survive.

Scrambling to my feet, I grabbed a branch and looked down.

I tried to see him.

I guessed the height of such a plummet.

You have to know.

The buzzing turned vicious in my ears and marrow.

Panic fought with calm as I edged from the drop-off and dug both hands into my mud-dirty hair.

You have to find out, Gem.

You can’t leave him.

Images of him in pieces at the bottom of the cliff made me sick. Shattered bones, vacant eyes, a scarred body that was no longer alive.

I ground the heels of my palms into my eyes, trying to rub such images away.

I’d done this. He was down there because of me.

If I hadn’t jumped on him, he would still be whole.

There wasn’t even the question of leaving. Not yet. I would never be able to live with myself if I turned my back on someone in agony.

Someone crippled and bleeding and—

It didn’t matter how he’d treated me. I didn’t care that I was trading my last chance at freedom to go after him. If he was dead, I would bury him. I would ignore the awful pang in my soul and would honor his remains as any loved one would.

It was the least I could do.

He had no one.

He deserves to have someone.

God, he deserved so much more than what he had.