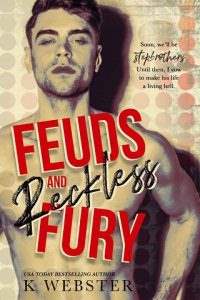 The hatred began when my father proposed to another man in a shocking moment that rocked my family to its core….

Now I’m on a quest for revenge against my father.

That means hitting him where it hurts—the new fiancé and the son he thinks so much of.

Alis is a bleached blond perfectionist thorn in my side who’s used to everything going his way. Grades, money, track—he dominates it all despite his short, insignificant frame.

Was one dad not good enough that Alis had to take mine too?

Until then, I vow to make his life a living hell.

I know I won’t regret wrecking their lives like they did mine.

I’ll give up everything, even my girlfriend and football, if it means I get a chance for retribution.

It’s reckless and risky, but I don’t have much to lose.

The havoc I wreak might ease some of the pain Dad caused my mother.

I’m willing to give it a shot.

What starts as a family feud will become a war…one I plan on winning no matter the cost.

There’s only one small problem.

I may have underestimated my opponent.

To Matt—I love you furiously, even when we feud.

A war began on the Fourth of July with a marriage proposal, fireworks, and a fist to my father’s face.

It’d been brewing, sure—a slow, burning build of anger and resentment toward my father. Over spring break of my junior year of high school, after he’d been gone a week “on business,” he came back and filed for divorce from my mother. He claimed he’d long since fallen in love with someone else and only recently found the nerve to do something about it. Mom was devastated and shocked. Fell into a deep depression. Went from stay-at-home mom to suddenly finding herself in the work world, searching for her sense of self-worth.

The separation wasn’t nasty and cruel.

It was cold and unfeeling.

Mom went numb as Dad froze her out.

I hated him for it.

Worse, I wanted to destroy the person who came between my parents. The monster who wedged themselves into an eighteen-year marriage, slicing through it like it meant nothing.

For months, Dad hid his mistress from me and my younger sister Carrie.

No matter what sort of digging we did, we weren’t ever able to find anything on the mystery woman.

On the Fourth of July, while standing on Dad’s boat, I learned who his mistress was.

It wasn’t a woman at all.

Dad, in front of his two stunned and confused children, proposed to Quinn Sommers.

Dad had barely slid the ring onto Quinn’s finger and grinned at Quinn’s uttered, “Yes,” before I rammed a fist into his face.

The fireworks were like a gunshot in the air, defining the very moment when all hell officially broke loose in my world.

Dad may have been the catalyst, but it was someone else I went to war with.

I wasn’t always a vengeful piece of shit. At one time, I was liked by almost everyone. Adults thought I was going places, and my peers respected me. But the end of the last school year changed things for me. Add in my shitty summer, and it went from bad to worse.

Now, all I care about is making him pay.

At one time, we were like two giant planets orbiting around the same star. Completely different planes, barely recognizing the other’s existence.

Sure, our fathers were best friends, but that didn’t mean Alis and I got along or followed their lead. We tolerated each other at best. Offered a polite nod whenever we were forced to be in each other’s presence.

Everything was fine, just as it was.

Until that hot July night.

After I punched my father, he crumpled to the floor of the boat, and Quinn gathered him in his arms, promising things would eventually smooth out. As much as I wanted to beat the hell out of my father, I couldn’t bring myself to hit him again.

I’m not typically so quick-tempered.

I prefer the slow simmer of getting even with someone over the quick heat of immediate revenge.

Getting even with Dad means hurting him in all the places I could. Which, since he’s now dumped his previous family for a new one, meant them.

There’s a method to my madness.

To bring down the kings, you take out their little prince.

“Is anyone else getting major serial killer vibes from Canyon, or is it just me?” Paige, my girlfriend’s little sister, asks from the back seat.

I flick my eyes to the rearview mirror to meet the bitchy smile of my mini nemesis. If it weren’t for the fact she’s Naomi’s sister, I would’ve already knocked her down a few pegs. Her arrogance is rubbing off on Carrie, which is starting to piss me off.