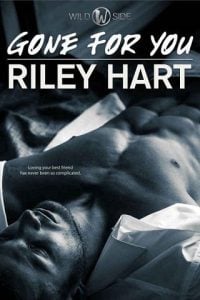 “Jesus Christ, you’re staring at Matt like you’re gonna walk over there and start humping his leg any second.” Miles crossed his arms and looked at Oliver as though he was ridiculous.

“Or raise your leg and pee on him. You know, to mark your territory. Get your scent all over him so people know he belongs to you,” his friend Chance added because obviously, they thought Oliver needed both of their opinions. Chance winked a purple, eyeliner-traced eye at him.

“Only he doesn’t. Belong to him, I mean. Matt’s great but he belongs to whoever he thinks can get him what he wants, Oliver. It’s time you realize that. I—”

“That’s a little unfair, don’t you think?” Chance cut Miles off. Oliver’s eyes darted between his two friends as Chance continued, “You never know, maybe he harbors a ridiculous, secret crush on Oliver the same way Oliver does him.” Chance smiled at Oliver as though he’d done him some kind of favor. He hadn’t.

“Gee, thanks. I’ve always wanted to be called ridiculous by one of my best friends. You’re a pal. And I don’t have a secret crush on Matty—fuck you both very much.” He was lying his ass off, and they all knew it. He had an absurd crush on his friend he needed to get over.

Or do something about.

Chance and Miles let out boisterous laughter he could clearly hear over the loud music of the party. They were eighteen—not old enough to get into the clubs they wanted to go to but young enough to crave being drunk every chance they had. This was basically their weekly routine.

“You’re such a fucking liar,” Chance told him and yeah, he was the biggest fucking liar there was. He wanted Matt and had for years. He glanced at both men, Chance with his short hair dyed the same purple as his makeup. He had a baby face, round, with eyes full of mischief. Miles was the opposite, always brooding with his hard, square jawline and buzzed hair, his skin shades darker than Chance’s.

“I’m thinking about telling him tonight.” Oliver took a drink of his vodka with cranberry and orange juice, and an added dash of grenadine—a drink the group had named Morningstar after a night of too many of them—while he waited for his friends to lose their shit. Logically, he knew telling Matt he wanted him was dumb. Matty had never shown the slightest interest in him that way. Matt would hook up with any guy that walked but he’d never so much as given Oliver a second glance. It was a great ego booster.

“Go for it,” Chance said at the same time as Miles’s, “No…no, no, no. That’s a very bad idea, Oliver. Actually, it’s the worst idea you’ve ever had. It could be the worst idea anyone in the world has ever had.”

“What the fuck?” Oliver shoved him. “It can’t be that bad!” People had crushes on their friends all the time. It was one of the most popular tropes there was, and considering Oliver wanted to be a writer, he paid attention to that shit.

“Yes, it can,” Miles told him. Oliver looked at Chance, who nodded his head in agreement.

He shrugged in reply. “I wanted to be supportive.”

Jesus, he hated his friends. Oliver looked over at Matt again. He had his back against a wall, a cup in his hand while he talked to another man who stood beside him. Matt’s brown hair hung over his forehead, but he kept pushing it back. Even though he couldn’t see them from here, Oliver knew Matt’s eyes were this wild, almost seafoam green. He had long, dark lashes, really kissable lips, and dimples that brought Oliver to his knees.

Matt was fucking beautiful. Everyone who looked at Matt thought he was. Matt knew it too. It was a fact.

They’d known each other since they were about twelve, but they hadn’t been good friends at the time. Matt’s mom had worked for Oliver’s parents. She’d cleaned their house and sometimes cooked meals for them. Every once in a while, she’d brought Matt with her and he’d always looked fucking miserable—not that Oliver could blame him. Matt hadn’t gone to school with Oliver, Chance, and Miles. He’d lived on the other side of Los Angeles. It couldn’t have been fun for him to be there while his mom cleaned someone’s house.

He’d tried to get Matt to hang out with him but at first, Matt wanted none of it. Eventually, he’d come around. It had taken him longer to warm up to Chance and Miles, whom Oliver had known practically since the day he was born.

They were different…so fucking different, but their differences had never mattered to Oliver. Matt was his boy. Nothing would come between them. And hell, if Oliver had silently been in love with him for years, how did he know Matt didn’t feel the same? Maybe he’d kept it to himself too.