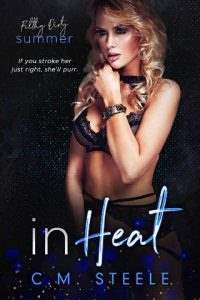 “Sweetie, thanks for watching the kitty,” my mother says, tapping my cheek as I step into her house. I’ve just gotten out of the office after a long day, and I’d like to go home and relax, but my mother is going on a two-month-long European tour with her new husband. They’ve been married for nearly six months, falling in love instantly. It took my mother longer than him, but after almost a year of dating, she agreed to try again. Love hadn’t been something she had luck with, even if she still believed in happily ever after.

“No problem, Mom. It’s only every couple of days for the next couple of months.” I own a hedge fund management company and handle clients with no less than a million dollars invested at any given time. Most days, I work at the office like a madman, but my company is about equal distance from her home and mine. Usually I’m a workaholic with nothing else to do, so coming here won’t be an issue.

Besides, I’ll be stopping by every couple of days to check on the cat, not living here like she hopes I will. Somehow, I sense an ulterior motive with this woman. Her nervous and suspicious energy is just rolling off her.

“Still, you’re a very busy and successful man who should be out dating, and I’m taking up your free time.” I knew that was coming. My stepfather gave me an apologetic look as if he already knew she planned to address my single status. It’s nothing new. It’s the reason she got on the dating app in the first place. She claimed to be testing the waters for me, letting me know if it could be trusted. I’m not sure I believe her.

Still, she found Mack Becker, who worships the ground she walks on, even willing to move into her smaller house instead of living in his much nicer condo because it’s what she wants. I don’t know if I could do that for a woman. I’ve yet to find a woman who makes me forget my selfish ways.

“Mother, please. You know I’m not interested in dating.” I’m too busy and too annoyed with the dating scene. I can’t get into the idea of swiping an app to read lies women make about themselves to land a guy. I’ve passed the age to meet a girl naturally in college like I should have, but my ambitions were greater than my libido.

“Yes, that’s a bit concerning. You should have five girlfriends at your age, swiping left and right all day long.” I choke, looking at my mother in complete shock. This woman has no filter.

My stepfather slaps my back to make sure I’m breathing fine. “Mom, you really need to stay off the internet,” I mutter, shaking my head.

“I’ve been telling her that since we met.”

“We met on the internet, you dork,” she says, glaring at her new husband with that cold look that she can’t fully muster for him. He’s been a great balm to heal the broken pieces of bad life.

She ignores us, looking around me, cheerfully changing the subject. “Oh, look. Here comes the neighbor’s daughter and her friend.” I groan, hoping she isn’t trying to set me up with either of these women because I’m not interested. I can take her little fluffy furball back to my condo instead.

I turn around, and my body and brain come to a full stop. The most beautiful and awfully young blonde woman is headed my way with her brunette friend, and I nearly choke on my own thoughts. I grunt, and my mother immediately scolds me. “Don’t be mean.” She has no idea mean isn’t the problem. My growing hard-on is the issue. Her long ponytail belongs in my fist while I bring her soft, plump lips to mine. I’m about to pounce on that tight little body, ready to see if those hips can handle my strong grip on her while I drill into her heat.

“Hello, Catherine, Charlotte. Let me introduce you to my son, Gabriel Bellamy.” She nervously ducks her head, hiding the blush on her cheeks. Her friend nudges her shoulder.

“Hello, Mr. Bellamy.” The soft innocence rolls off her words, saying my name as if I’m so much older than she is, and now that I get a better look at her, I’m afraid that’s the case. She’s barely legal from the top she’s wearing. It reads Class of 2022. What the fuck?

“It’s nice to meet you, girls.” My sweet blonde with eyes as bright as a clear summer sky smiles softly, doing her best to observe me without being obvious. Although she’s giving away her attraction easily. Her lips remain parted while she moves her gaze down my body, feeling as if my cock is proudly standing at attention, I interrupt her perusal. “Mother, aren’t you due to be at the airport soon?”