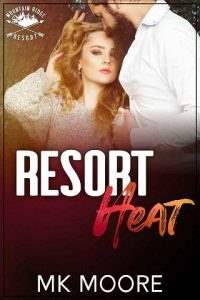 “Congressman Clancy has a press conference scheduled for nine this morning to address the affair his wife had with her student. He needs to be heartbroken and dismayed that his wife would act in such a manner let alone in public. He will let his constitutes know that he’s filed for divorce, but he and the children are doing fine,” I tell her after reviewing my notes. Poor guy. His wife, a high school teacher, got caught with her student at a local restaurant. She was arrested, and his parents pressed charges. It’s been in the press for a solid week now. It’s a huge deal since it’s usually the guy, the politician, who does the cheating. It’s newsworthy, but we’re about to change the narrative. I’ve passed this one off to my assistant, Joy.

“Are you sure Joy can handle it?” Rachel Paulsen, my boss, asks.

“I am. I’m sorry Rach, I really have to get a move on it. The car will be picking me up soon,” I tell her. I have been trying to get off of the video conference she insisted I log on for even though I requested the whole week off, starting today.

“I know, but what will we do without for a whole week?” she asks, shuffling through a pile of papers on her desk.

I've never taken a day off in the year and a half that I’ve worked at Paulsen + Grove PR. I’ve worked nights, weekends, and holiday’s because scandal never takes a vacation. My job is just like Olivia Pope’s but with fewer dead bodies, not no dead bodies, just less. I’ve earned this vacation, but knowing my sister, it won’t be much of one. It’s going to be a cocktail-filled hell.

“You’ll be fine. I’m only four and half hours away. If anything major happens, I’ll come back,” I promise.

“You better. Have fun and give my congratulations to your sister,” she says before ending the meeting.

“I will,” I reply to no one. I finish packing my small suitcase and grab my garment bag, heading down onto the street.

“I’m getting married, bitches!” my twin sister, Arina, screams, climbing into the limo that will take us to the Mountain Ridge Resort in Virginia from Washington, DC. She was the last of her ten-girl-deep bridal party to be picked up. Her week-long celebration culminates in the wedding of the century to Congressman Hoyt Kennedy. Not those Kennedy’s, but he is rich as hell. Her friends' replying chorus of “whooo’s” pierces my eardrums. Ugh. I am so not looking forward to this week, but as the maid of honor, I’m afraid I have no choice. Arina saw to that. She’s had her dream wedding planned out since she saw The Princess Bride for the first time. It’s going to be dreadful. I don’t buy into the whole love and marriage scheme. Okay, I'm lying. I might be bitter because despite looking exactly like Ariana, no guy has ever asked me out before. It must be my award-winning personality.

Arina and I couldn’t be any more different. She just graduated from the University of Miami with a degree in fashion. At the same time, I graduated early two years ago from the University of North Carolina at Chapel Hill with a degree in communications and marketing. She partied hard while I hit the books. She met the esteemed congressman at a party our father, Tyler Blair, a federal court judge, had when he married our stepmother, Kyra. She’s just twenty-three, only two years older than Arina and I. She was his paralegal; it was quite the scandal down at the courthouse.

But on to this mess. My sister fell head over heels in love with Hoyt that first night as did he, which is why we find ourselves on our way to the resort at noon on a Monday. I’ve planned her bachelorette party, bridal lunch, and a trip to the salon, all before the rehearsal dinner his family has planned for Friday night. Saturday morning by ten-fifteen, she’ll be Mrs. Kennedy, and she couldn’t be happier. I should be happier for her, but I’m not. I’m salty because I wish it were me getting married. Not to Hoyt, of course, but a man of my own. A man who will look at me twice and make me feel alive.

“Ariana?” Khloe, a girl from Arina’s sorority, says, touching me on the arm.

“Yes,” I say, snapping out of my thoughts and back into the present.

“Do you know how long it will take to get there?”

“The driver said about two hours once we picked Arina up,” I tell her.

“Awesome. I am so ready to get this party started,” she says, pulling a full bottle of tequila, Arina’s drink of choice, out of her Victoria’s Secret tote bag. Great. The party is starting early. I have to physically force myself to not roll my eyes at her. Khloe pours everyone's shots. I accept it and toast to Arina but then set it aside. I don’t normally drink, and I am not about to start with tequila.