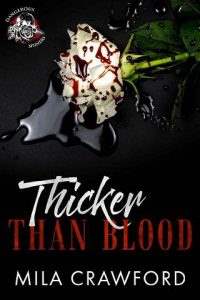 The cold air hits me as I stumble out of the bar. My fourth consecutive night of drinking myself stupid. I reflect on ending it all because life is a bleak loop of bullshit.

My brother tells me I need to get laid or beat the shit out of someone, and I’ll snap back, but the truth is, I’m not interested in either. I want to float in blackness and not ponder on shit.

“You should come around more often, man. You’re hilarious,” some random guy says as he pats me on the back.

I smile and wave my hand while my stomach churns, and the bile of too much alcohol and not enough food moves up my esophagus. It’s fuckin’ easy to be liked by random frat boys at bars. I pull out the black card and load them up with alcohol, which brings the girls, and everyone has a good time. Good old Alexie, always the life of the party. They don’t see what’s in my head—depraved, fucked up darkness.

My lungs expand with the air I don't want to breathe as I walk to my bike. It’d probably feel good to crash it against the side of the building I just left. My boys say I’m too destructive, and they’re partly right. I wasn’t always this way, but ten years of the shit I’ve seen has a way of twisting a man’s insides until he craves nothing but the empty blackness.

My feet shuffle on the pavement as if on autopilot, moving because they have to, not because I will them to.

I turn my head toward the source of the voice—a woman barricaded by a giant man. His arms are on both sides of her head, covering her with his frame and blocking her from my view as he cages her in. I can see her red heels moving awkwardly against the ground before one lifts, and the man stumbles back as she knees him in the balls.

She stands over him, hands on her hips, a fierce look on her majestic face. “Letting you buy me a drink in the bar doesn’t mean you get to bang me beside a dumpster, you stupid prick.”

My lips turn up in a smile, and for the first time in a long time, it’s not forced. I can’t help my sense of exhilaration at seeing this woman taking no shit from a man more than twice her size. I don’t think many men could hold their own against a guy this fuckin huge, but there she is, refusing to cower down, head held high, dignity in hand, and ready for battle.

My cock twitches as I stare at the Black goddess. Her skin’s a perfect shade of umber, her dark, tight curls framing her pretty face as her amber eyes blaze with fury. And her body—Jesus, it’s a sin to have a body like that. She’s tall, with huge breasts, thick thighs, and a round stomach any sane man would want to sink his teeth into. I’d never say no to having her legs wrapped around my waist or neck. She’s a vision. If the perfect-looking woman exists, there she stands.

An average man wouldn’t get a hard-on as he watches a beautiful woman attack a man twice her size, knowing it might not end well for her. But I never claimed to be an average man.

“You little bitch,” the guy spits.

He gets up, one hand grabbing his crotch while the other dives into his pocket and pulls out a switchblade.

My fingers wrap around my gun, tucked in the back of my black jeans. If this fucker thinks I’d let him hurt her, he’s got another thing coming.

He flicks the knife open, and the goddess’s eyes widen. “I was gonna have a little fun with you. You would’ve enjoyed it. Now I’m gonna fuck you while I cut off your fucking s, you dumb cunt.”

Rage. All I see is complete rage. I’ve spent ten years of my life hunting men like this who degrade, humiliate, and force people into sexual servitude. During that time—helping my brother look for his woman—we helped a lot of victims escape situations like this: abusive husbands, pimps, and sex trafficking rings. There’s no fucking way I’ll stand by and watch this motherfucker hit or rape a woman, use her like she’s fucking nothing.

The goddess moves away from him, her back pressed against the brick wall. “Listen, you don’t have to do this. You can walk away. I promise I won’t say anything.”

Her voice is shaking. The strong lioness is now a helpless kitten.

“Hey, what’s going on here?” I walk over to them, getting right up to the guy’s face.

The fucker flinches, pretty typical for a coward, and that’s exactly what he is for intimidating a woman.