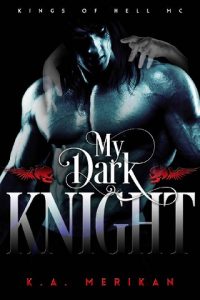 “Good boy…” Knight smiled and leaned down to stroke Jake’s cheek as his muscles started getting lazy in the afterglow of orgasm.

Jake’s eyes had that glazed-over look Knight always liked to feel all over his skin. Awe and admiration that never failed to get him warm on the inside and flexing his muscles that bit more.

“Ready for round two, Prospect?” Joker grinned widely and gestured for Jake to come over. He stood by the window and stubbed out a cigarette.

“Yes, sir!” Jake was quick to say as he crawled over to Joker, his cheeks red.

“That mouth’s never full.” Knight laughed and stuffed his dick back into his pants. It would be hard to let go of having Jake’s eager lips on Knight’s cock whenever he asked, but one day Jake would stop being a prospect. Then again, Knight doubted Jake’s hunger for cock would wane because of it, so there was that.

Joker groaned and gently pushed on Jake’s forehead. “Keep that mouth open for me when I come back.”

Jake nodded with a serious expression, as if he’d been given a responsible task. To be fair, having someone’s dick in your mouth was a pretty important responsibility. Not that Knight’d ever given head, but he could imagine that was the case.

“Coming!” Knight yelled in the general direction of Beast’s voice and started walking.

“Or not-coming,” Joker whispered as he followed.

Knight made his way down the corridor, knowing that it would be a busy club Church meeting. Many things needed to be dealt with after the hiatus in the club’s not-entirely-legal operations. Their former president, King, had been the one to facilitate all the deals with Mr. Magpie, an underworld jewelry and arts dealer from New York. Seventy percent of the club’s income came from that partnership, so King’s death had temporarily put the Kings of Hell MC into limbo. With all the illegal cargo gone from the clubhouse, Knight got permission to inform the authorities about the two-century old bodies found on club grounds. Understandably, the police had been suspicious at first, but carbon dating of the old bones soon cleared the club’s name. With the skeletons and other evidence safe in an appropriate research facility and a new agreement with Mr. Magpie in place, business could resume.

Knight’s life hadn’t changed much since his best friend, Beast, made him vice president. He still had fun with his brothers, still fucked the prettiest girls and the sexiest boys, and he was still the designated electrician on call. Now he also had to make a fuckload of phone calls and send out dozens of emails, all coded in case of the police looking into their trade more closely.

He didn’t mind it much. Negotiating terms with sellers and buyers of the expensive jewelry and precious stones they traded in came to Knight as easily as it had to King. It took being a bit of a risk-taker and loads of charm—both of which had always come easily to Knight. If only the whole process didn’t take up so much of his time.

Knight was perfectly suited for the tasks his prez, Beast, passed on to him, but they came with an amount of responsibility Knight hadn’t anticipated when he accepted the VP patch. New duties made a considerable dent in the time he could dedicate to partying and his other needs, but then again, the new position came with the perk of taking over the former president’s apartment—possibly the largest and slickest of bachelor pads in existence.

All in all, though, between the tasks Knight was newly in charge of, transporting stolen jewelry, and making sure the ancient building of their clubhouse had a stable supply of electricity, his days became much busier than he was used to.

“These need to be taken to Mr. Magpie’s,” Beast said as soon as they all sat down, and he pushed a small, rattling box of rubies to one side of the antique table in their gatherings room.

The latest transport from the West Coast was in, and most of the members were busy sorting all the jewels and precious metals by type and buyer. Some pieces of jewelry would be sold as they were, others needed to be slightly modified or transformed into raw materials. Rev was coordinating the process, and after twenty years in this business, had enough skills to deal with some of the process in a designated area within the clubhouse. As problematic as the huge, old building sometimes was, it came with many secret rooms that were undetectable to random visitors.